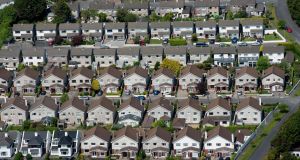 The Society of Chartered Surveyors Ireland say the actual cost of building a new three-bedroom semi-detached residential building in the greater Dublin area is €330,000, of which €150,000 were building costs.

Construction costs account for less than half of the overall price of building a three-bedroom semi-detached house in Dublin, according to a new survey.

The Society of Chartered Surveyors Ireland published a report on Wednesday that found the overall cost of build a three-bedroom semi-detached residential home in county Dublin was more than €330,000.

The society of surveyors suggests several measures such as reducing VAT and bringing down development levies on new builds to stimulate further development in Dublin.

The labour and construction costs of building the house were €150,000, or 45 per cent of the total.

Micheal Mahon of the society of surveyors said the findings could come as a surprise to people outside the industry.

“The country is experiencing a chronic housing shortage which is contributing significantly to the current homelessness crisis,” he said.

“We need to kick-start housing supply as soon as possible and to accelerate from the current output of 12,000 units per annum to the 25,000 units which is required.”

The findings are based on a study of eight house-building projects in the greater Dublin area.

Mr Mahon said the numbers also showed the cost of building a new home in the capital was €45,000 higher than the median asking price of a three-bed semi-detached up for sale, according to the property report from Myhome.ie and Davy.

Among five key proposals made by the surveyors’ group in the report is to reduce VAT for new builds to 9 per cent from the current rate of 13.5 per cent, a move that would replicate the dispensation given to businesses in the hospitality sector.

If VAT was eliminated, as has already happened in the UK, this would bring the price of a three-bedroom semi-detached home below €300,000, according to the authors.

Other suggestions include reducing development levies by as much as €7,000, to increase the supply of land across the capital and to introduce a cost-benefit analysis for all regulations in the building sector.

“Whether they opt to reduce VAT to 9 per cent or to zero as is the situation in Northern Ireland, or to reduce finance costs to 5 per cent . . . prompt and decisive action is needed. They may well opt for a combination of all these measures,” said Mr Mahon.

He also sought to downplay reports of land hoarding by developers, saying the main impediment to houses being built is the cost involved.