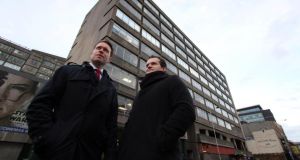 New Generation Homes founder Greg Kavanagh is parting ways with the high-profile property management and development company and his long-time business partner Pat Crean. Under the new arrangement the firm’s assets have come under the control of its UK backer M&G Investments, and Mr Crean.

Meanwhile, New Generation’s asset portfolio, comprising a number of key Dublin development sites, will be transferred into the ownership of a new, unnamed company to be headed by Mr Crean, director and chief executive of New Generation Homes. He has been with Mr Kavanagh since the company began speculatively buying sites around the capital at knockdown prices five years ago.

In a statement on Thursday, Mr Kavanagh and Mr Crean said they were excited about their new ventures and wished each other well. Mr Kavanagh said: “We have built a property business of extraordinary scale in the past few years and I believe now is the time for me to move on to my next opportunity.”

Mr Crean said: “I am looking forward to developing this high-quality portfolio of property investment through the new company, and in the process helping alleviate the shortage of both quality housing and commercial property.”

New Generation made headlines from 2011 onwards when Mr Kavanagh and Mr Crean spent up to €300 million buying up development land. In that time New Generation, under Mr Kavanagh the self-styled “Ronaldo of the property industry” saw a series of high-profile backers come and go, including US fund Starwood, British billionaire John Beckwith’s Pacific Investments and Irish software millionaire Pat McDonagh.

Most recently UK asset manager M&G Investments, owned by US insurance giant Prudential, has been New Generation’s sole backer, funding both its building and site acquisition activities from a 10-year fund.

Details of the deal finalised this week have not been revealed, but the 31-year-old Mr Kavanagh will now depart the business and has indicated he plans to develop some sites he retains privately and explore opportunities overseas.

In recent months New Generation unsuccessfully sought to sell off a portfolio of residential development sites in order to capitalise on the rising property market and the shortage of ready to go sites.

Known as Project Firefly, it placed the 27-site portfolio on the market with an asking price of between €325 million and €350 million, a sum industry observers widely agreed was somewhat ambitious. The sites were estimated to be capable of delivering 2,772 units of residential accommodation on 143 acres of land, but the closest bid is understood to have come from Richard Barrett’s Bartra Capital at about €225 million.

The Dublin properties offered for sale include sites in Greenacres, Dundrum, where 119 apartments are proposed on a 3.1 acre site, and the former Europa Motors site in Blackrock, both of which are under appeal with Bord Pleanála.

In Harold’s Cross, New Generation began construction of a large-scale apartment development on the grounds of Mount Argus Church, to be named Mount Argus Mill, which will comprise 184 apartments, but work stopped there in recent months. Nearby on the site of St Clare’s convent, New Generation secured planning permission in 2015 for a proposed 209-unit apartment development, but construction has not yet begun.

New Generation Homes also plans the construction of 320 apartments and commercial space on a site in Cabra; offices and 200 apartments in Dublin’s south docks, on Lime Street; 100 houses and 270 apartments at St Anne’s Park on Dublin’s northside; and 340 apartments on the Naas Road close to Tallaght and Citywest.