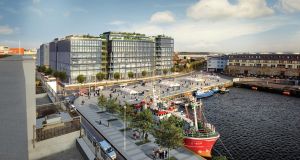 More than 26,000 square metres of office space is provided for in the proposed development by Mr Barrett’s company, Edward Capital, at a site overlooking the tidal docks.

Mr Barrett’s plan is regarded as one of the largest commercial developments in the city in several decades, and adjoins the 8.2 acre site around Ceannt Station which CIE is seeking a partner to develop.

An Taisce’s Galway branch had submitted that the Bonham Quay project was in “direct material contravention” of the Galway city development plan 2017-2023, specifically relating to minimum required residential content of 30 per cent as part of the inner harbour regeneration area.

The four blocks range in size from 4,820 to 11,845 square metres, and could accommodate up to 2,600 employees, according to Edward Capital. Building may generate over 500 construction jobs.

Mr Barrett’s company says that a revision of plans includes a dedicated arts/cultural facility, along with public squares and plazas.

Earlier this month, the Court of Appeal confirmed the appointment of an examiner to seven companies controlled by Mr Barrett.

The High Court had dismissed an application in September to grant court protection from creditors to four firms connected to businesses including the five-star G Hotel and the Eye Cinema, both in Galway.

The High Court confirmed the appointment of Neil Hughes as examiner to three other related companies involved in the operation and ownership of the Meyrick Hotel in Eyre Square.

It is understood the Galway development is not affected by the examinership.