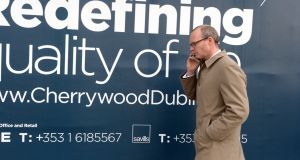 The Department of Housing has rejected claims that its measure of house building in the economy is unreliable and may be inflating the true level of construction by as much as 50 per cent.

Experts claim the 15,000 figure for house completions last year being used by Minister for Housing Simon Coveney bears little relationship to the number of new homes being built.

This is because it is based on ESB meter connection data, which typically overstates the level of new builds, reflecting the fact that new electricity connections can be triggered by work to existing buildings, or by formerly vacant units coming back on stream.

The data also include recently completed but unoccupied Nama developments and former ghost estates, some of which were built over a decade ago.

When contacted by The Irish Times, the department said it did not consider its housing statistics as being “in any way unreliable”.

“The department’s completion figures are based on connections to the electricity grid. This has been used as a proxy for completions since 1970, as developers would not connect a property to the grid until it was ready for sale,” a spokesman said.

The Government’s Housing Action Plan is targeting a residential building rate of 25,000 units per annum. Last week, the department put the official level of housing completions for 2016 at 14,900.

However, Dublin architect Mel Reynolds suggested the actual level of new builds was probably closer to 8,000, barely one-third of the Government’s target. He bases his calculation on stamp duty transactions (3,148 for the first 11 months of 2016); once-off house commencements (3,272 for the first 10 months of 2016); and the number of local authority builds (117).

The total is nearly 50 per cent lower than the department’s housing completion number.

Mr Reynolds estimates more than 21,000 vacant built units were double-counted as new build completions in the five years up to 2015. He said the actual level of new builds was 29,722 for the five-year period, 42 per cent lower than the official figures suggest.

“Market analysis, Government policy, housing targets and the national accounts continue to be based on methodology that is flawed and figures that are significantly distorted,” he said.

The Department of Housing spokesman said its aim was to estimate the sub-components of the completions figure; namely the actual end-to-end construction; the finish-out of housing estates, which were largely already complete; and reconnections of previously vacant properties and others, with the assistance of the ESB and the Central Statistics Office (CSO).

“We need to know from a research and monitoring perspective what we are actually building in the calendar year. Can we measure performance against the output target of 25,000 units per annum, as set out in the Housing Action Plan, if we don’t know the number of newly built units each year?” she asked. “Knowing that we connected 14,000-15,000 homes for electricity in 2016 does not provide us with the performance benchmark we need if we are to tackle the housing supply situation.”

Dublin Institute of Technology academic Lorcan Sirr believes the housing statistics do not take account of houses becoming derelict or being taken over for reconstruction and that the focus should be on the increase to the existing housing stock rather than the number of new builds.

1 Michael Smurfit: ‘I asked Trump to invite me to the White House for my 80th birthday’
2 ‘I’m so lucky to be in the Caribbean – a million miles from Derry Girls’
3 Minister calls on EU to act against tobacco firms ‘undermining’ menthol ban in Ireland
4 ‘The recovery needs to be a full-scale economic renewal’
5 Tobacco makers still trying to make a mint from Irish menthol market
6 Joint accounts: if one of us dies, can the other access the money?
7 Charlie Chawke plans 290 apartments and hotel on Goat pub site
8 Ryanair expects air fares to fall when flights take off again
9 Tax and the Pandemic Unemployment Payment: Your questions answered
10 Ireland stands to benefit in a big way from investing in public transport
Real news has value SUBSCRIBE