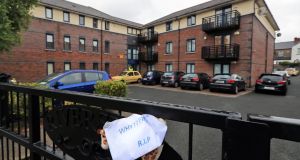 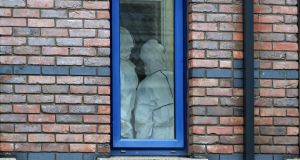 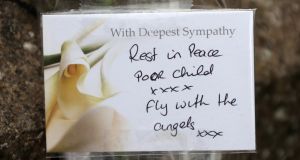 A message on flowers at the scene at the Riverside apartment complex, Kimmage where the body of a three year old child was discovered. Photograph: Colin Keegan, Collins Dublin. 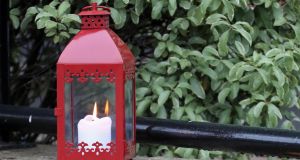 A candle at the scene this morning at the Riverside apartment complex, Kimmage. Photograph: Colin Keegan, Collins Dublin.

Local residents expressed their disbelief as news broke that a three-year-old boy had been found stabbed to death in an apartment complex in Kimmage in south Dublin.

The toddler was described as “beautiful” and “chatty” by residents from Poddle Park in Dublin 12 on Tuesday morning.

Emergency services were called to the Riverside apartment block at about 7pm on Monday. The boy, who had suffered serious knife wounds, was pronounced dead at the scene.

The boy’s mother, understood to be an Iranian doctor in her 40s, also suffered stab wounds and remains in a serious condition at St James’s Hospital. It is understood the woman had been living at the apartment block for the last two to three years.

Lorraine Leon, who lives opposite the apartment block said: “He was gorgeous, beautiful, big brown eyes, very lively, chatted, would talk to you all the time. He was mad about my dogs.” Ms Leon said she would often see the young boy on his tricycle going to the shop .

“She loved it here, was settled, didn’t talk about going back at all. She was totally settled, she had her friends and mixed in the community. She was great,” Ms Leon said. Ms Leon said the woman had one child “her world, that’s what she called him”.

A resident of Riverside apartments, who did not wish to be named, said he had met the woman a few times in the complex and she had told him she was a doctor.

“I saw the police and firemen here when I arrived around seven o’clock [last night]. I was thinking it was a fire,” he said. “People are shocked. She would leave here in the car and the child was always with her. He was always happy and talked.”

Other residents of the complex appeared visibly shocked and upset as they left the complex on Tuesday morning. Neighbours and residents from the area visited the scene throughout the day to drop off flowers and cards.

A female neighbour who also lives directly across from the apartment complex said “I don’t really know them…I’ve heard they were a lovely family. It’s just something you don’t expect. We’re all stunned.”

Greg Byrne, who lives a few doors down from the apartment complex visited the scene to drop off flowers. “I didn’t know them. It’s just a shock you know. We just thought we would come down and show some solidarity,” he said.