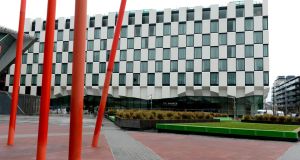 The Marker Hotel in Dublin’s Grand Canal Square will have 30 bedrooms on the new floor, and the main restaurant will be moved to the rooftop. Photograph: Cyril Byrne

Businessmen Ulick and Des McEvaddy have secured the financial backing of a Dubai-based investment group to build a proposed €2 billion terminal scheme at Dublin Airport, according to the Sunday Independent.

Omega Air boss Ulick McEvaddy and his brother Des have been attempting for more than 20 years to develop a third independent terminal on 130 acres of land they own adjacent to the airport. They now have the support of Dubai-based Tricap Investments, an investment fund with a diversified portfolio that spans real estate, energy and aerospace in the Middle East, the US, Asia and Africa, the newspaper reports.

The expansion will include about 30 bedrooms on the new floor, bringing the hotel up to 217 rooms, while it also involves moving the main restaurant to the rooftop. The roof would be about two-thirds enclosed, with a small, open terrace, allowing it to be used all year round.

Minister for Finance Michael Noonan said on St Patrick’s Day that more than 120 overseas banks, insurers and other financial companies are currently in talks to move operations to Ireland as a result of the UK’s decision to quit the European Union.

Mr Noonan made the comments on Friday at an event in Singapore.

Mr McGann, in his first public outing as chairman of Aryzta, said the company would undertake an overhaul of the board and a review of its business model. He also said he had received “very, very clear feedback” from shareholders that they did not see “the strategic fit” between Aryzta and Picard, its French frozen-food retailing associate.

Unilever may sell off its margarine division for €6bn

The newspaper understands that rather than opt for a defensive bid for a rival such as Colgate-Palmolive, or a spin-off of its entire food arm, Unilever is leaning towards a sale of the margarine business, which controls just under a third of the entire global margarine market.