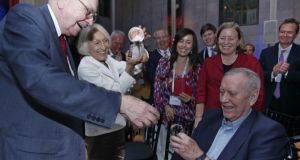 Mr Buffett, whose fortune has been estimated at €43 billion, described Mr Feeney, the founder of Atlantic Philanthropies, an organisation that has pledged more than $6.5 billion in grants to good causes in Ireland and internationally, as “my hero”.

He said Mr Feeney was an inspiration to both him, and Bill and Melinda Gates to give away billions of their fortune while alive.

“[Chuck] looks at money as something that can do something for other people. When you get down to it, it is that simple. His billions and billions of dollars touched millions of lives. He is my hero. He is Bill Gates’ hero. He should be everybody’s hero.”

In response, Mr Feeney said: “It’s simple, really. You get more satisfaction from giving while you’re alive and involved. You learn and make adjustments to achieve the highest and best use of your resources.

“You get to see what you’ve helped accomplish. I am grateful that, by giving me this award, Forbes is encouraging other successful businessmen and women to more fully engage in philanthropy in their lifetimes.”