Decision not to halt Project Eagle sale at heart of ‘concerns’ over £1.24bn transaction 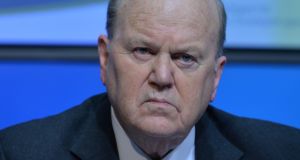 It is “unclear” why Michael Noonan did not instruct Nama to “suspend the sales process” for its Northern Irish portfolio when it learned of “proposed fee arrangements” in place, a Stormont inquiry has found. File photograph: Alan Betson/The Irish Times

It is “unclear” why Minister for Finance Michael Noonan did not instruct Nama to “suspend the sales process” of its portfolio in the North when it learned of the “proposed fee arrangements” that were in place, a Stormont inquiry has found.

In a report published today, the Northern Ireland Finance Committee also finds that the decision not to halt the sale of the Project Eagle properties lies at the heart of “concerns” about what became a £1.24 billion transaction.

The ultimate buyer was Cerberus, a US firm.

The cross-party committee, which has investigated the deal for eight months, believes Nama needs to provide “further information and clarification” about the sale process, and said it “regrets” Mr Noonan did not encourage Nama to co-operate with the committee fully by attending an oral hearing.

It has stressed it found Nama’s refusal to attend “particularly unhelpful”.

“Nama needed to be more open and accessible, given the importance of the Project Eagle portfolio to the Northern Ireland economy,” the committee said.

Nama has said it is “making no comment” on the publication.

Independent TD Mick Wallace, who has brought concerns about Project Eagle to the floor of the Dáil, said the report highlighted the inaction of the Government and Mr Noonan’s failures.

He said the Minister for Finance was aware of the proposed fee arrangements in March 2014 and “didn’t raise an eyebrow”.

He said it further strengthens concerns about the workings of Nama and called for further, independent investigation.

“This could be the biggest financial scandal this country has ever seen. It has cost the Irish taxpayer billions of euro. A commission of investigation must be established headed by an independent person. There is still so much more to emerge.”

In their report, the Stormont politicians are highly critical of the role played by Nama in the Project Eagle sales process after it was alerted by a potential bidder - the US investment firm Pimco - that it had identified potential concerns in relation to fees requested in respect of the transaction.

They also highlight their concerns over the lack of knowledge Nama had about meetings that involved a member of its former Northern Ireland advisory committee, Frank Cushnahan, and “prospective buyers of Nama-secured assets in Northern Ireland”.

The report states: “The committee notes with regret the decision of the Nama board not to suspend the Project Eagle sales process once Pimco had disclosed to the agency in March 2014 that Pimco’s proposed fee arrangement with the Brown Rudnick international law firm included also the payment of fees to Tughans, a Belfast law firm, and to a former external member of Nama, NIAC.

“From the evidence to date, the committee considers this development to be a core area of concern within the entire sale and purchase process.”

The Stormont committee underlines in its report that Mr Noonan did not inform the Northern Ireland Executive at the time of Pimco’s revelation and emphasises the “significance of Project Eagle to the economies on both sides of the Border”.

The committee said it secured the release and publications of more than 2,000 pages of documentation from a range of sources, but that “the full facts surrounding the Project Eagle sale remain unclear”.

This may in part be due to the fact, as highlighted by the Stormont inquiry, that it was unable to hear “oral evidence” from a number of what it describes as “key witnesses”.

It lists 18 witnesses whose evidence must be heard if the Stormont inquiry is to “realise” its objectives.

The current Committee for Finance and Personnel has recommended that its successor committee continues the review following the next Assembly elections in May.