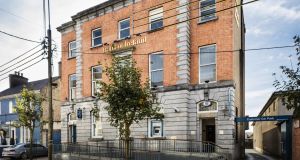 Bank of Ireland in Mallow, Co Cork, is the highest-value branch in the portfolio, valued at €3,220,274. Photograph: Peter Moloney

The Layden Group is to embark on a major revamp of its commercial property holdings by selling 17 Bank of Ireland branches in the Dublin suburbs and provinces.

Joint agents Murphy Mulhall and Cushman & Wakefield are guiding €28.5 million for the portfolio, which will show a blended net yield of 7.4 per cent – considerably more than was offered in recent sales of individual bank branches.

Layden’s revised investment strategy was prompted by a desire to replace most of its “dry” investments such as the bank branches with commercial properties that have further development potential. Just months before the property crash in 2007, Layden purchased 29 bank branches for €75 million. It subsequently sold off 12 of them.

The 17 buildings going for sale produce a combined rental income of €2.29 million, with all but two of the leases (Whitehall in the north Dublin suburbs and 94 O’Connell Street in Limerick) providing for upwards-only reviews on 25-year leases until 2032.

The Whitehall building will be offered for letting shortly, and the Limerick premises are being fitted out for use by New Ireland Assurance Company, part of the Bank of Ireland group.

Though there is a clear preference by the selling agents to offload the portfolio in a single lot just as it was purchased, they are willing to divide it into several lots to facilitate early sales.

With all the leases except Whitehall and Limerick having more than 14 years to run, the agents expect strong interest from Irish and overseas pension and investment funds because of the bank’s excellent reputation and the attractive lot sizes.

The Layden Group is headed by Joe Layden. Its directors are Layden’s daughters Gwen, Siobhan and Anita and his son Jack. The company has invested more than €22 million since the crash on investment properties in the Dublin area, including Grafton Street, Clonskeagh and Ballymount. There are further plans to rebalance the portfolio in the coming months.

The company’s most notable Dublin interests include George’s Arcade between South Great George’s Street and Drury Street, which has been eagerly sought by several funds interested in developing it as an exclusive food market.