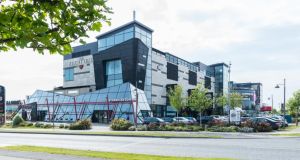 Airside South Quarter near Swords in north Dublin: Two four-storey multi-let adjoining buildings are for sale with a guide price of €12 million

A mixed development of mainly leisure and dining facilities on the edge of the Airside Business Park near Swords in north Dublin is to be offered for sale through agents JLL.

Brian Shields of that firm is guiding about € 12 million for the two adjoining buildings which are bringing in annual rents of about €1.5 million. They are located in what is now known as Airside South Quarter, which was developed separately from the main business park owned by Irish Life, IPUT and the original promoter David Daly.

The two four-storey multi-let buildings dating from 2009 have an overall floor area of 8,361sq m (90,000sq ft) alongside a surface and basement car park. The front block extends to 5,295sq m (57,000sq ft) and has a mix of tenants on the ground floor including TGI Fridays, Starbucks, O’Brien Sandwiches, Pizza Dog, a beauty salon and a ground-floor restaurant and bar. The widely visible upper floors of the block are used as a night club by The Wright Venue. The second block is slightly smaller with an overall floor area of close to 3,716sq m (40,000sq ft). The ground floor is vacant but all three upper floors are rented by a gym and a penthouse casino. JLL say that none of the tenants on the 1.7-acre campus will be affected by the sale.

JLL calculates that Airside has a catchment of more than 616,000 people within a 20-minute drive.

Swords continues to be among the fast growing towns in the country.