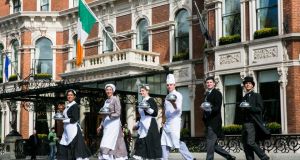 Staff marking the 190th anniversary of the Shelbourne Hotel in April of this year.

The Shelbourne Hotel has been acquired by US property investment group Kennedy Wilson, which is planning to invest millions of euro into the business to build on its status as the top five-star hotel in Dublin.

The acquisition was effected last night via a pre-pack receivership, with Ernst & Young restructuring partner Luke Charleton appointed to handle the process.

Ownership of this prized asset has switched from Jerry O’Reilly and John Sweeney, the remaining owners from a consortium that acquired the hotel in 2004. Other members of the consortium included Bernard McNamara, who was recently declared bankrupt in Britain.

The receivership has no impact on the operation of the hotel, with all sums owed to staff, trade creditors and the Revenue Commissioners to be paid in full by the new owners. The property will continue to be managed by Marriott International.

Staff and creditors were briefed this morning about the change of ownership.

In March, Kennedy Wilson announced that it has acquired loan notes secured by the Shelbourne for $152.4 million (€110 million), with about $74 million of equity invested. This debt was owed to the former Anglo Irish Bank.

Kennedy Wilson has now taken full control of the business and is planning to enhance its facilities.

This will include a facelift for the hotel’s facade, which is considered a “priority project”. Plans are also being developed to add a hair and beauty salon to its existing spa facilities, and to refurbish its 19 suites and public areas.

It is also considering adding a fourth sitting each day to its afternoon tea service due to strong demand.

The hotel’s 246 bedrooms are already being upgraded, in a €3 million investment that will conclude in November.

Stephen Hanley, general manager of the Shelbourne, said it was “business as usual” for the hotel.

“The management and staff at the Shelbourne Hotel are delighted to welcome its new owners, Kennedy Wilson, to this landmark Dublin property, where it is expected that both parties will work closely on further enhancing and developing the hotel.”

Mr Hanley said the hotel is trading successfully. In 2013, its revenues rose by 12 per cent to €29 million while its operating profit increased by 40 per cent to €6.3 million.

Revenues for this year are expected to be marginally higher at €30 million, which reflects the impact of revenue lost due to the refurbishment of its bedrooms. Its occupancy is running at close to 90 per cent of available rooms.

Commenting on the deal, Peter Collins, managing director of Kennedy Wilson, said: “The successful completion of this acquisition represents further progress towards our goal of the building a large-scale and diverse portfolio in the Irish market, including commercial multi-family, loan purchases and originations, residential and hotels. We believe there will be continued improvement in the Irish economy, and we are committed to a long-term position in this market.”

Kennedy Wilson has acquired a number of high-profile property assets in Ireland over the past year or so. These include the Stillorgan Shopping Centre in Dublin, the Portmarnock Hotel and Golf Links for €29 million, and a residential block at Central Park in Sandyford for €88 million.

On Thursday, the group announced that it has acquired Elliott loan portfolio from Ulster Bank for €120 million.

1 HSBC board rethinks overhaul and seeks even deeper cuts
2 Fruit and vegetable firm obtains interim court orders against technical manager
3 ‘Over 1,000’ pubs have interest in Covid-19 insurance test case
4 Pricewatch: Coronavirus has given us four categories of shopper
5 Will remote working mean an end for the corporate HQ?
6 Reopening economy does not cause coronavirus spike – researchers
7 Player Wills site: Hines and APG to seek permission for 416 homes
8 ‘I’ve so many outgoings with family life . . . it puts manners on you’
9 Pilita Clark: A lot of us are losing it in lockdown – but we really shouldn’t
10 Schrems calls on EU authorities to intervene in ‘Kafkaesque’ DPC case
Real news has value SUBSCRIBE