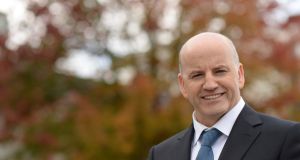 A company of former presidential election candidate Seán Gallagher that owns a commercial premises in Dublin must provide a heating and cooling system to its tenant, the High Court has ruled. However, Ms Justice Teresa Pilkington agreed to stay certain orders against Clyde Real Estate Blanchardstown Ltd after being told it was not possible to reconnect the old heating, ventilation and air conditioning (HVAC) system and a new one is in the process of being installed.

Nokia Ireland had sought various orders against Clyde, its landlord, including injunctions preventing Clyde decommissioning the HVAC plant pending the full hearing of the case. The application was opposed.

Outlining its case earlier this week, Nokia claimed conditions in its offices, where 100 people are employed, were “arctic” and difficult to work in due to alleged failure to provide proper heating services.

Mr Gallagher, chief executive of Clyde Real Estate, disputed the claims. Clyde, the court heard, is in the process of redeveloping the premises and installing a new HVAC system to replace an obsolete one and hoped the new system would be up and running in early 2019.

Nokia claimed it had complained about excessively hot and cold temperatures at the premises since 2016 and had been using portable heaters in recent months. It initiated proceedings in June, when Ireland was experiencing a heat wave, claiming Clyde was in breach of a lease agreement of March 2015 concerning HVAC services.

In her ruling on Friday, Ms Justice Pilkington said the relationship between the sides had become “fractious”. While there was a lot of evidence, much of it highly technical, central to her consideration was the terms of the 2015 lease agreement which obliged the landlord to provide heating/air conditioning for the tenant, she said.

Because the landlord had shut down the old HVAC system without notice to the tenant, she was satisfied to make orders compelling Clyde turn on the old system and for reconnection of hot water supply to Nokia’s offices, she said.

After Ciaran Lewis SC, for Clyde, said the old HVAC could not be turned back on due to the replacement works, the judge decided to place a stay on that order. The judge said she had not been informed during the three-day hearing it would be impossible to get the old system back working and she accepted Mr Lewis’s submissions his client was concerned about being in breach of an order with which it was impossible to comply. It had been her understanding from the evidence, while restarting the old HVAC system would have had its difficulties, it would not have been impossible, she said.

The matter was adjourned to the end of January for the court to be updated on progress of the new HVAC system.