Sales top €600m in first half of year 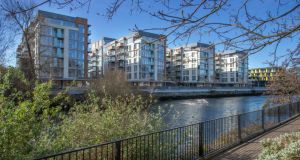 Clancy Quay, a new development of 420 apartments on the site of the former Clancy Barracks, sold for €82 million in April

More that 50 property investment sales with a value of €610 million have been completed in the first six months of this year. This is broadly similar to the turnover for the full 12 months in 2012, according to new research completed by Savills and Lisney.

Domhnaill O’Sullivan of Savills said it was evident from the increased turnover that investors had renewed confidence in the Irish market. They were continuing to see a strong demand from foreign buyers, particularly those from the United States, Germany, the UK, Israel and Australia.

He said an analysis of the turnover figures for the first half of this year showed that private Irish investors and Irish funds acquired properties to the value of €312 million, equating to 51 per cent of the turnover. Americans were the next largest buyers after spending €161 million or a 27 per cent share of the market. European buyers were next with €81 million of purchases, representing 13 per cent of the overall market.

Apartment sales
O’Sullivan said that most of the demand was for office investments, with 48 per cent of the turnover in that sector between January and June.

Investors were chasing well-located third generation offices where it was expected that rents would increase in the next few years because of a shortage of new office developments.

There was also an increasing demand for apartment sales particularly where there was 100 per cent ownership available. Multi-family deals completed in the first six months, including the sale of Clancy Quay for €82 million, came to €105 million.

Aoife Brennan of Lisney noted that the number of deals done in Q2 was well down on the opening months of the year. The tone of activity, she said, had generally been more embracing of risk. Some investment opportunities sold contained vacant accommodation, short-term leases and attached undeveloped land.

There had also been some activity outside the main city areas, with well let units in smaller towns finding buyers. Typically, initial returns for such properties were close to or above 10 per cent.

Brennan said that the nature and origin of investors interested in buying into the Irish market was continually widening. While it was difficult to accurately assess how much capital they had to spend, conservatively Lisney believed this to be at least €6 billion.

Notably in Q2 was the growing number of Asian investors considering opportunities. The appeal of the market, mainly Dublin, had spread around the globe, she said.

Brennan said there was a growing appetite among investors for more risk as prime deals became more expensive and scarce. The successful disposal of parcels of land in recent months – some of which was for investments – was a clear sign that development in prime areas would return in the not too distant future.

No shortage of buyers
“We believe this could be within the next 12 months but it will be limited to offices and blocks of residential in central areas where there is most investor demand. This is likely to be achieved through forward funding agreements, the first time in six years such arrangements will be utilised.”

Looking at the prospects for the remainder of the year, O’Sullivan said the outlook remained extremely positive, with the sale of about €75 million of investment property already agreed and a further €320 million of stock currently available.

“We foresee an additional €450 million of property coming on to the market in Q3 which bodes well for turnover of over €1 billion for the year, a level which has not been reached since the highs of 2007.”

O’Sullivan said that supply continued to be a problem in a market with no shortage of well-capitalised buyers. Due to the level of competitive tension that existed at present, they were forecasting yield compression in the office and multi-family sectors, while the second half of the year would also see an increase in the volume of retail investments coming to market.

Brennan also made the point that pricing has improved. She said the large number of investors chasing the most desirable opportunities had forced buyers to pay in excess of the asking prices. “We believe this trend will continue in the second half of the year.”