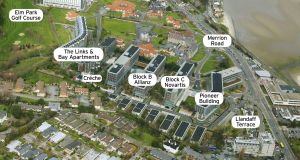 Elm Park: virtually completed when the property market crashed in 2007

A combined offer from Joe O’Reilly’s Chartered Land and the US-based Ares Investment Funds and a rival bid from American investor Starwood have put both camps ahead of others to buy Elm Park, the extensive office and residential development for sale at Merrion Road in Dublin 4. A third tender from LoneStar seems unlikely to succeed.

The investment is expected to sell for over €200 million, well ahead of the €185 million- plus quoted by the Nama-appointed joint selling agents DTZ Sherry FitzGerald and Savills.

Anglo Irish Bank had loaned around €550 million on the development, which was carried out by Bernard McNamara, Jerry O’Reilly and the late David Courtney.

It was virtually completed when the property market crashed in 2007.

The 17.3 acre complex is currently producing a rental income of €9.5 million from two of the three office blocks and two apartment buildings. An additional €6 million-plus in rents can be expected in the short term if the new owners decides to fit out the Pioneer building at the front of the site for office use.

The five- to eight-storey block was originally planned as a 168-bedroom hotel and a day-care hospital, but with no one willing to embark on either project it became obvious that the only viable option was to convert it for office use, particularly as there is an acute shortage of high-density office accommodation on the south side of the city.

One of the three office blocks, the Quartz building, with a floor area of 5,760sq m (62,000sq ft) was sold shortly after its completion to Friends First, now trading as F&C Reit, and was subsequently let to global insurance broker Willis and the Indian IT consulting firm Wipro at €263 per sq m (€24.50 per sq ft).

That rent roll is expected to rise sharply in the next five- year review.

The two other office blocks are considerably larger, one of them extending to 7,896sq m (85,000sq ft), which is let to Novartis, the Swiss multinational pharmaceutical company. The rent roll of €1.46 million equates to €183 per sq m (€17 per sq ft).

A second block with roughly the same floor areas serve as the Irish headquarters of Allianz. The rent in this case works out at €484 per sq m (€45 per sq ft). The two office blocks and a successful cafe on site account for over €5.7 of the total rent roll of €9.5 million.

The sale also includes a creche and eight newly restored terrace houses fronting on to the Merrion Road.