Printing business claims access blocked due to redevelopment of campus 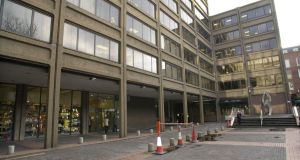 The Setanta Centre in Dublin 2, from which Reads operates, is undergoing a substantial redevelopment. Photograph: Brenda Fitzsimons

The owner of printing business Reads has brought a High Court action against its landlord in a dispute over access to the Dublin city centre premises.

O’Flaherty’s (Nassau St) Limited, trading as Reads, has brought the case against Setanta Centre Unlimited Company as owner of the office building on Nassau Street.

The defendant, which is owned and controlled by the family of businessman Larry Goodman, owns the Setanta Centre, which is being redeveloped over the next two years at a cost of €150 million.

Reads, represented by Michéal O’Connell SC and John O’Regan BL, operates an outlet within the Setanta Campus, just south of but visible from Nassau Street.

It is claimed the defendant, as part of its redevelopment works, has blocked off the entrance to Nassau Street.

It had been previously arranged that a temporary access route would be put in place, but Reads claims it has been informed of the defendant’s intention to erect hoarding across that temporary access, rendering the premises completely inaccessible.

The plaintiff hopes, under the Government’s recently published Roadmap for Reopening Society and Business , it will reopen to customers in the coming days.

It claims, by boarding up the entrance, its business and the employment of its workers will be put at risk.

It is claimed the defendant’s actions amount to breach of right of way and that the defendant is trying to make life difficult for Reads so its business fails, and it can be bought out of its lease prematurely.

It wants an injunction requiring the defendant to remove the obstruction currently blocking access to the retail premises.

The injunction application is opposed.

Represented by Rossa Fanning SC, the defendant denies any wrongdoing or that it is trying to put the applicant out of business.

It says it has tried to accommodate the plaintiff, whom it says has been aware of its plans to redevelop the property since 2018.

It says, as part of the redevelopment works, it has taken steps to comply with health and safety advice, and is mindful of regulations brought in arising out of the Covid-19 pandemic.

Reads says it has yet to see the health and safety advice cited by the defendant.

The matter was briefly mentioned on Thursday before Mr Justice David Barniville, who adjourned the hearing of the injunction application to later this month.

Mr O’Connell said an application would be made to have the dispute admitted to the fast-track Commercial Court list.

Counsel added there would be separate proceedings by his client alleging the defendant had acted outside of the planning permission it had acquired.

1 In six months we will be in the grip of a 1980s-style recession
2 Angela Merkel sweeps in to save the euro zone
3 Stocktake: Has Warren Buffett lost the magic touch?
4 Donohoe warns of cost of pandemic as budget deficit swells to €6.1 billion in May
5 Brother is dragging his heels as executor of uncle’s will - is there anything I can do?
6 Retailers ‘asked to work almost like hospitals’ during reopening phase
7 Should my mam wait for house prices to drop before buying?
8 Chartered Land moves closer to approval for Dublin’s tallest tower
9 Stocktake: Bored punters are dabbling in stocks
10 The fight over how to pay for the global economic recovery has begun
Real news has value SUBSCRIBE