Plan for Clerys a ‘breathtaking disregard’ for decent business

OCS Properties has applied to Dublin City Council for permission to convert store into a hotel, shops, offices and bars 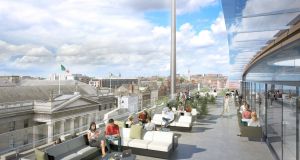 O’Connell Street and a redeveloped roof top on Clerys

A union official representing the 460 workers who lost their jobs when department store Clerys closed last year said the owner’s application to redevelop the building shows a “breathtaking disregard” for decent business practice.

OCS Properties has applied to Dublin City Council for permission to convert the store into a hotel, shops, offices and bars , and to add a new level to the building on O’Connell Street.

Siptu official Ethel Buckley said the decision of OCS and businesswoman Deirdre Foley to apply for permission before the outcome of a court case concerning the takeover and closure of of the business shows a “continued breathtaking disregard for even a semblance of decent business practice”.

Ms Buckley pointed out that her union had succeeded in getting Dublin City Council to stipulate that plans for O’Connell Street should assure workers of fair conditions.

Maureen Deans of Justice for the Clerys Workers said she hoped the council would not grant planning permission until Ms Foley and Clerys purchaser Natrium engage with former staff.

“It is my hope that the Director of Corporate Enforcement will also act in relation to the events surrounding the sale of Clerys and the manoeuvres that took place in advance of the closing of Clerys.”

Clerys’s takeover and closure last year with the loss of 467 jobs sparked an investigation by the Workplace Relations Commission and a review of company law. The store shut in June 2015 after Gordon Brothers sold the holding company, OCS, to Natrium, a joint venture between Ms Foley’s D2 Private and UK company Cheyne Capital Management.

It is still open to the Department of Social Protection to pursue the companies involved for this.

Liquidators Kieran Wallace and Eamonn Richardson of KPMG were appointed to wind up the company. Shortly after that the Workplace Relations Commission instructed inspectors James Kelly and Pat Phelan to investigate the circumstances surrounding the redundancies.

D2 Private and Deirdre Foley recently went to the High Court to challenge the inspectors’ right to enter the company’s premises and seize documents as part of their investigation. The court has yet to rule on the challenge.

1 Fianna Fáil may have just pressed the pause button on the property market
2 UK to prioritise EU trade deal over one with United States
3 Who are Ireland’s 17 billionaires?
4 Are there annual limits on inheritances or gifts to a child?
5 My father in a nursing home wants to gift me his house
6 Dunnes premature in challenging Point Village resolution move, Supreme Court finds
7 State ranked highly for attracting skilled workers but low on gender issues
8 Belfast regeneration project worth £500m gets green light
9 European investor acquires Harcourt Road offices for €55m
10 Saudi prince’s WhatsApp account ‘directly involved’ in Bezos hack
Real news has value SUBSCRIBE