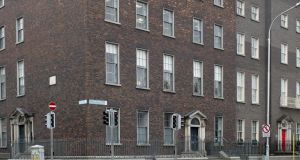 46 St Stephen’s Green: one of four office investments in south inner city offered for sale on behalf of Bank of Scotland (Ireland)


The fund is expected to pay in excess of €12.5 million – €2 million above the guide price – for the investment, which is being sold on behalf of Garret Kelleher’s Shelbourne Developments.

If the sale of 46 St Stephen’s Green to IPUT is ratified later this week by agents CBRE, the fund will control a substantial city centre office precinct with an overall floor area of around 5,574sq m (60,000sq ft).

The fund already owns the adjoining building at 2 Hume Street as well as 47/49 St Stephen’s Green, a 2,787sq m (30,000sq ft) block, which was bought as part of the Irish Airlines portfolio for €8 million.

Office space in this location generally attracts one of the highest rents in the city because of its close proximity to the main shopping and leisure attractions in the south inner city.

Though Irish Life and Davys were also known to be keen to buy the investment, IPUT were apparently prepared to bid well over the guide price because of the strategic importance of the block to the fund.

Number 46 St Stephen’s Green is one of four office investments in the south inner city offered for sale on behalf of Bank of Scotland (Ireland). All of them attracted heavy bidding from Irish and overseas funds.

The other three were the recently-enlarged Molesworth House on South Frederick Street; the P Elliott-owned Verschoyle House on Lower Mount Street, and Liam Carroll’s Pembroke House on Upper Pembroke Street.

IPUT’s acquisition of the St Stephen’s Green investment would bring to almost €300 million the fund’s overall spend in the Dublin office market over the past year.

Just before Christmas it spent €143 million on two office investments in the Dublin docklands. It paid €50 million for Riverside 2, a seven-year -old office building at Sir John Rogerson’s Quay rented by Bank of New York Mellon and Beauchamps solicitors.

It was also the top bidder at €93 million for One Grand Canal Square, which is occupied by Accenture and HSBC.

IPUT achieved an overall return of 16.1 per cent on its €800 million property portfolio last year – well ahead of the 12.4 per cent benchmark from IPD.