The net initial yield from the residential element alone is likely to be about 6.64% 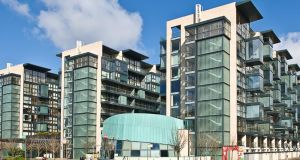 In the largest sale yet of Dublin apartments, the National Asset Management Agency (Nama) is to seek buyers for 761 homes, that are all rented, in four separate suburban developments.

Dómhnaill O’Sullivan of Savills and David Cantwell of Hooke and MacDonald are guiding in excess of €160 million for the portfolio, which is to be sold as a single entity or in lots.

The net initial yield from the residential element alone is likely to be about 6.64 per cent.

The apartments, owned by four different vendors, are at Beacon South Quarter in Sandyford, Dublin 18; Charlestown, at the junction of the North Road and the M50, in Dublin 11; Lansdowne Gate in Drimnagh, Dublin 12; and Bakers Yard at North Circular Road, Dublin 1.

The Beacon and Bakers Yard properties also include commercial buildings and development sites.

There is considerable confidence that the investments included in the Orange Collection will be of interest to several overseas funds and real estate investment trust (REIT) companies as well as some domestic investors because of the opportunities to add significant value through rental growth, letting the remaining commercial space and developing four approved sites that will add a further 187 apartments and 7,977sq m (85,863 sq ft) of commercial space.

The mix of apartments, duplex homes and penthouses in the sale are predominately two-beds (534), with 128 three-beds and the remaining 99 one-beds.

All the homes have high-specification fit-outs and well-maintained communal areas in keeping with the vast majority of Dublin developments completed during the boom.

The entire portfolio is producing an annual income of €10.4 million with almost 99 per cent of it coming from the apartments.

Savills and Hooke and MacDonald say that, based on the present headline rents available and the prospects of letting vacant commercial space in two of the developments, they believe a gross rent of €12.6 million is achievable.

The largest number of apartments previously sold was the 640 units at Tallaght and Island Quay bought last year by the Galway-based Comer brothers.

The Charlestown development, off St Margaret’s Road in Finglas, includes 235 of the 285 apartments developed by Tom and Michael Bailey’s Bovale Development in 2007.

The homes are in multi-storey blocks alongside the shopping centre and have car parking at basement level.

The selling agents will be quoting over €38 million for the apartments, which are producing a gross income of €2.8 million. This is expected to rise to €3.34 million once the rentals adjust in line with market trends.

The Cosgrave Group’s development at Lansdowne Gate in Drimnagh will include 224 of the 280 apartments completed in 2005, along with 224 car-parking spaces. The units are producing €2.97 million, which seems set to rise to €3.4 million in due course.

The attractive apartments are on the banks of the Camac river near Drimnagh Castle and are expected to sell for in excess of €46 million.

Beacon South Quarter offers the opportunity to be part of the continuously expanding Sandyford neighbourhood.

Originally developed by Paddy Shovlin’s Landmark Developments, the scheme is producing rents of €3.46 million from 217 modern apartments (out of a total of 850), four commercial units extending to 2,394sq m (25,576sq ft) and 234 basement car-parking spaces.

Once full occupancy within the existing development is reached at current rent levels, gross income is expected to exceed €4.5 million. The guide price for the Beacon Quarter sale will be €61 million.

The fourth apartment development, at Bakers Yard, completed by Cleary Doyle, will involve a majority ownership of this Dublin 1 scheme which has O’Dwyer Property Management as its fixed term receiver.

A total of 85 of the 132 apartments in three blocks are included in the sale along with six ground and first-floor commercial units extending to 792sq m (8,525sq ft).

An adjoining site of 0.18 of a hectare (0.45 of an acre) at the corner of NCR and Portland Street has planning permission for a further 55 apartments and three commercial units and 93 basement car-parking spaces.

Savills and Hooke and MacDonald will seek €15 million for the available part of the development which produces a gross income of €1.16 million. However the rent is expected to rise to €1.25 million when all the rental levels adjust in line with market conditions.