Rent prices more than €1,000 higher than national average in docklands area, according to figures from estate agent Owen Reilly 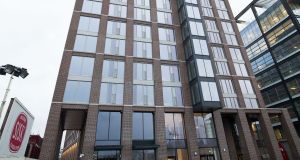 One of the busiest estate agents in Dublin’s docklands has said the average salary of his tenants renting in the area rose to €117,095 last year, more than double the level of three years ago.

This data is based on 181 new rentals agreed by estate agent Owen Reilly in the docklands last year. The jump came as rental prices for the tech-heavy business district warmed up substantially.

Figures from Owen Reilly show that three-bedroom apartments in the area recorded the most significant percentage rise in rents in 2017, asking 12 per cent more than in 2017. The average rental price stood at €4,166.

The rental figures quoted are solely market rents and relate to new or substantially-refurbished properties, which are not subject to the Government’s 4 per cent rent pressure zone cap.

For properties not subject to the cap, average rent inflation in the area reached 8.7 per cent last year.

With average rents at €2,392 in the third quarter of last year, the Docklands area was considerably higher than both the national average (€1,334) and the Dublin average (€1,915).

With significant international employment opportunities in the area – primarily in the technology sector – just 19 per cent of his tenants were Irish last year.

In terms of the sales market, Mr Reilly noted that there was a “notable slowdown in price growth”, while market dynamics shifted at the beginning of the summer with a “significant increase in supply”.

Supply rose 41 per cent compared with 2017 in the area and selling times increased to an average of 7.4 weeks.

The average asking price was €531,595 and the average selling price ended around 2.3 per cent higher. While build-to-rent is taking off in the area, 47 per cent of buyers last year were owner occupiers while cash was used to buy in three quarters of the transactions. The majority of sellers were landlords leaving the market, Mr Reilly said.

“I believe we are finally beginning to see a more normal, sustainable market emerge, after two decades of either very steep growth or very sharp corrections coupled with oversupply or lack of supply,” he said.

How much state pension will I get next year? 12:50
Ulster Bank to introduce new card payment controls on app 11:46
US and European stocks slip amid Covid-19 fears 11:15
Apple planning updates to its AirPods earbuds next year 11:01
UK consumer confidence falls after five months of gains 10:52