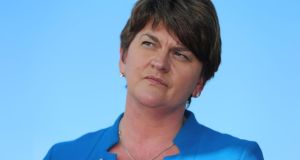 Arlene Foster: The Department of Finance and Personnel has no records to suggest that departmental officials had ‘sight’ of correspondence, according to the acting First Minister. Photograph: Niall Carson/PA Wire

There are no official records of “the content of any discussions” between former Northern Ireland finance minister Sammy Wilson and Brown Rudnick, the American law firm that advised the successful buyers of Nama’s Northern Ireland loan portfolio, the North’s Finance Minister Arlene Foster has said.

Mrs Foster, who is acting First Minister, has also disclosed that the Department of Finance and Personnel (DFP) has no records to suggest that departmental officials had “sight” of correspondence from Brown Rudnick to Mr Wilson or from Mr Wilson to the Minister for Finance Michael Noonan.

It is a matter of public record that Mr Wilson received a letter on June 24th, 2013, from Brown Rudnick partner Tuvi Keinan which referred to discussions that had taken place between the firm and Mr Wilson and also outlines how it is seeking his “guidance” before formally approaching Nama about the Northern Ireland loan book.

Mr Wilson subsequently forwarded a copy of this letter to the Mr Noonan when he wrote to him also on June 24th, 2013, to inform him that he had been in discussions with interested parties in the Nama loan book and to ask him to consider Brown Rudnick’s proposals.

But Mrs Foster has stated in new correspondence to the Stormont inquiry investigating the sale of the Nama portfolio that there is “no record of officials having sight of the correspondence from Brown Rudnick to Minister Wilson dated 24 June 2013”. She also said there was no evidence that the letter from Mr Wilson to Mr Noonan was “drafted” by officials from the Department of Finance.

In her letter to the Stormont Committee for Finance and Personnel, Mrs Foster further outlines that her department has “no records of the content of any meetings” between the former finance minister and, as she describes, the potential purchasers of the Nama portfolio in the North.

She also confirms there are no official departmental records of the “content of any communications between other Executive Ministers and potential purchasers of the Northern Ireland loan book”.

She is also unable to shed light on a meeting that took place on March 25th 2014 at Stormont involving former finance minister Simon Hamilton, the then first minister Peter Robinson and former US vice president Dan Quayle, who is chairman of Cerberus, the American investment group that paid £1.2 billion (€1.6 billion) for the Nama portfolio in the North.

Davy chief executive and deputy chairman resign in fallout from €4.1m Central Bank fine 13:26
Liam Carroll’s legacy in property market will be debated for years to come 05:41
Officials may release beef carcasses from a herd whose location was unknown 05:31
Women on Air calls for ‘hard data’ and broadcasting quotas 05:23
‘Essential’ retailers milk the Covid restrictions 05:16