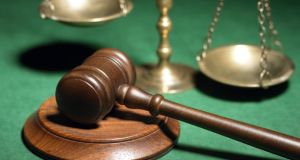 A former general manager of business banking with AIB is being pursued by a company of the National Asset Management Agency for judgments of more than €50 million arising from unpaid loans, mostly issued for property development.

In a second action, NALM is suing Mr Hopkins and his wife Mairéad for sums of €2.84 million and £7.02 million arising from various facilities and guarantees.

It is claimed those facilities were advance for purposes including to buy commercial property in west Sussex, to assist in purchase of an investment property in Rathgar, Dublin, and to buy shares in AIB.

In the action against Mr Hopkins and Mr Durcan, Nama said the proceedings arise from loans advanced by Bank of Ireland and the former Anglo Irish Bank, now Irish Bank Resolution Corporation.

Mr Justice Peter Kelly agreed to fast-track that case yesterday after rejecting arguments of delay advanced on behalf of Mr Hopkins who, the judge heard, accepted he was indebted to Nama but not to the extent claimed.

The judge also agreed to fast-track the proceedings against Mr and Mrs Hopkins after rejecting claims of delay by Nama.