Nama claims: List of those Stormont committee wants to interview 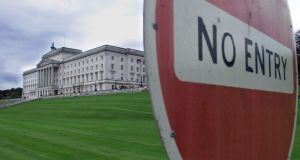 The list of people and businesses the Northern Assembly finance committee wants to hear evidence from about Mick Wallace’s Nama allegations provides its own narrative about this complex case.

The list of people and businesses the Northern Assembly finance committee wants to hear evidence from about Mick Wallace’s Nama allegations provides its own narrative about this complex case.

Independent TD Mick Wallace, to quote the Northern Assembly’s finance chairman Daithi McKay, “kicked the whole thing off last week” with his allegation that £7 million (€9.83 million) was lodged into an Isle of Man account reportedly intended for a Northern Ireland politician or party.

This followed from the sale of Nama’s Northern Ireland portfolio of more than 850 properties to US investment giant Cerberus for £1.5 billion. The portfolio had been worth £4.5 billion.

Wallace said he has more information about the sale known as Project Eagle which he may later disclose.

Mr Wallace said a routine audit at Tughans had found that £7 million ended up in an offshore account “reportedly earmarked for a Northern Ireland politician or party”.

Tughans had been employed by the international firm of lawyers Brown Rudnick to assist with the successful Cerberus bid. It is claimed that £15 million was paid to Brown Rudnick and that half of this fee went to Tughans.

Tughans disclosed that the £7 million was diverted to Mr Coulter’s account. He was a managing partner in Tughans who earlier this year stood down from Tughans and also from his position as head of the Confederation of British Industry in Northern Ireland.

Tughans said Mr Coulter acted without the knowledge of other partners and that the Law Society in Northern Ireland is now investigating the matter.

The finance committee wants to hear from the Law Society what its investigation into Mr Coulter’s activities has revealed.

Mr Cushnahan also referred work to Tughans, where he had had an office, and to other Northern Ireland law firms.

It is reported that Mr Cushnahan and Mr Coulter were involved in an earlier unsuccessful attempt to sell off the Nama portfolio to another US investment company, Pimco.

Nama said Mr Cushnahan did not have access to confidential information. Mr Cushnahan’s lawyer said he was satisfied Mr Cushnahan complied with his fiduciary and statutory obligations as a member of Nama’s Northern Ireland advisory committee.

The US investment company Pimco and Nama are in dispute over whether Pimco pulled out of the sale or whether it was requested by Nama to withdraw.

The US investment company and successful bidder for the portfolio said it was “deeply troubled” by Mr Wallace’s allegations and that it wanted to make it “clear that no improper or illegal fees were paid by us or on our behalf and we take any allegation to the contrary extremely seriously”.

Nama has insisted the sale of the portfolio was not compromised. It said the sale “delivered the best possible return” and that matters internal to Tughans had no bearing on “Nama’s open, competitive sales process”.

The Sinn Féin chairman of the finance committee, Daithi McKay, has asked any public representatives with relevant information to bring it forward to the committee’s inquiry, which hopes to begin hearings next week.

Who the purported intended recipient of the £7 million is continues to cause great interest and intrigue in Northern Ireland.

Ulster Unionist Party leader Mike Nesbitt said that “for the record I can state categorically I am not the intended recipient of this alleged £7 million”, while First Minister Peter Robinson and Deputy First Minister Martin McGuinness said anyone with information about the matter should bring it to the authorities.

“I can unequivocally, and without reservation, confirm that, like Mike, I have not received nor was I ever to receive any proceeds from Cerberus, Tughans or anyone else in relation to the Nama sale,” added Mr Robinson.