It is claimed M&J Wallace failed, refused or neglected to make repayments 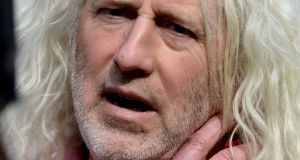 Some €2m is alleged to be due under a guarantee and indemnity dated March 30th, 2009, from Independent TD Mick Wallace, who was a director of M&J Wallace Ltd

The Commercial Court has fixed next month to hear an application for €2 million summary judgment orders against Independent TD Mick Wallace.

The €2 million is alleged to be due under a guarantee and indemnity dated March 30th, 2009, from the TD who was a director of M&J Wallace Ltd.

In a letter of  June 23rd, 2009, Ulster Bank agreed to make available a facility of €2.1 million.  It was later taken over by Promontoria (Aran) Ltd of Grant’s Road, Lower Mount Street, Dublin.

It is claimed that M&J Wallace failed, refused or neglected to make repayments.

The proceedings are being brought by Promontoria, a Cerberus company.

Last August,  it is claimed Promontoria demanded repayment from the Wallace firm of €2.2 million, including interest.

Mr Justice Brian McGovern has transferred the case to the Commercial Court and fixed January 27th for the hearing of the application.