Sale of buildings at Clanwilliam Court to test market recovery 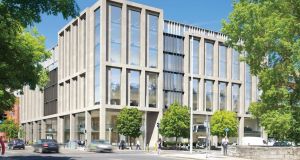 International property investor London + Regional is to test how much commercial property values have recovered in Dublin since the crash by offering for sale three office buildings at Lower Mount Street and Clanwilliam Place in Dublin 2.

The company, owned by UK brothers Ian and Richard Livingstone, is seeking offers of about €54 million for Blocks 1, 2 and 5 Clanwilliam Court which are only partially let but where the real value lies in the potential to redevelop what is a key site at the intersection of the south docklands.

The companies bidding for it are likely to include Hibernia REIT which recently acquired an adjoining office building with the intention of redeveloping and enlarging it to meet the increasing demand for high-quality office space in the Central Business District. Hibernia paid €26.5 million – €3.5million above the guide – for Marine House, a dated 3,821sq m (41,132sq ft) block which is fully rented and producing more than €1.8 million per annum.

Separately London + Regional bought Block 2 in 2012 for €10 million and two years later acquired Block 1 for €12 million. Block 5, a five-storey over basement office block of 2,240sq m (13,348 sq ft) which is fully let to An Bord Bia would obviously have a considerably higher valuation.

The three blocks have an overall floor area of 8,699sq m (93,637sq ft) of which more than half, 5,438sq m (58,540sq ft), is currently vacant. There are two levels of basement parking servicing the entire development with 228 car spaces allocated to the three blocks.

The portfolio is currently producing a rent roll of €886,661 but with some rent increases in the pipeline and good potential to lease vacant space the rent could be increased to €4.6 million, according to London + Regional.

Clanwilliam Court, originally built by the Clancourt Group in the 1970s and 1980s, forms part of a larger development of almost one-acre which includes the three blocks for sale as well as Marine House, Kestrel House and a residential apartment block under different ownership.

Architects Henry J Lyons have already designed a single- block development to replace Blocks 1,2 and 5 that would create a gateway to the Central Business District. It is envisaged that the proposed eight- storey building would have retail units along Lower Mount Street.

There is an existing planning permission – granted in 2009 and extended in 2014 – for a seven-storey-over-existing basement office building. The scheme was to have a floor area of 5,219sq m (56,177sq ft) along with 57 car parking spaces, 60 bicycle spaces and parking for 10 motorcycles.

The Clanwilliam area is already seeing signs of a renewal with Ardstone Capital and Hardwicke currently funding a new seven-storey glazed block of 4,738sq m (51,000sq ft) that will be more than three times larger than Kestrel House, a 1980s block fronting the Grand Canal bought from Bruce Shaw for €10 million.

What does the future hold for our species? Ask the experts

1 Coronavirus: Notion of a rapid economic recovery is at best wishful thinking
2 Nice to see you: Which is the best video calling option around?
3 Makhlouf running Central Bank from Greek lockdown
4 NTMA to raise billions of euro for State in bond sale amid Covid-19
5 Covid-19 crisis puts value of the modern-day office into focus
6 Coronavirus: Journal Media to cut pay by up to 20 per cent
7 Mater hospital turns to robots to help in battle against Covid-19
8 Frontline bank workers to get pay top-ups during Covid-19 crisis
9 Irish people willing to share data to fight coronavirus
10 Mother of invention: the new gadgets dreamt up to fight coronavirus
Real news has value SUBSCRIBE