Requirement of up to 200,000sq ft a major boost for stagnant Dublin office market 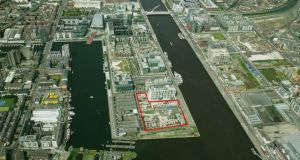 The stagnant Dublin office market is in line for a crucial shot in the arm with the decision by the leading accountancy firm KPMG to invite proposals for the provision of a large new headquarters in the city centre by the early part of 2017. There have been no new office construction projects in the Dublin area for five years.

Yesterday’s announcement by the professional services company that it is seeking a new headquarters has been triggered by the continuing growth of the firm and the fact that the lease on its main office block at Stokes Place, at the junction of Harcourt Street and St Stephen’s Green, will run out in the middle of 2017.

The company is also apparently anxious to accommodate all of its 1,600 staff in a single building rather than at two separate locations.

About 700 staff are currently based at Harbourmaster Place in the IFSC where the main lease does not expire until 2022 but a number of others are due to run out in a relatively short period.

Dated offices
The now dated offices at Stokes Place – currently being sold by Nama as part of a larger portfolio once owned by Treasury Holdings – have been rented by the accountancy company for more than 30 years. The new headquarters is expected to have between 16,722 and 18,500sq m (180,000 to 200,000sq ft) of space and is most likely to be located in Dublin 1, 2 or 4.

This is the largest single office requirement in Dublin since Vodafone rented a 24,618sq m (265,000sq ft) block at Central Park in Leopardstown more than a decade ago.

KPMG is thought to be paying annual rents of about €7 million for Stokes Place and the IFSC. The main block in Harbourmaster Square is held as an investment by businessmen Martin Naughton and Lochlann Quinn.

Declan O’Reilly of estate agent HT Meagher O’Reilly is to advise KPMG on its choice of accommodation, location and rental terms.

With development costs for a new 18,500sq m (200,000sq ft) office expected to exceed €50 million – apart from the site value and fit-out costs – developers will be hoping to achieve a pre-letting in the mid-€30s per sq ft as well as a minimum lease of 15 years before they can be confident of getting bank support.

KPMG may opt for a design- and-build contract with a developer once a site has been found.

Locations likely to be considered include three acres next to State Street Bank in the south Dublin docklands; Spencer Dock where there are any number of options after the collapse of Treasury Holdings and a nearby plot formerly owned by Liam Carroll’s Zoe Group next to the partially built office block to be completed by the Central Bank.

Another site of 2.02 acres in the centre of Ballsbridge could also be considered. It was originally bought by developer Ray Grehan for more than €171 million and is now being marketed by Jones Lang LaSalle with a guide price of over €15 million.

Dark horse
When it comes to choosing a new HQ for KPMG, the dark horse may be meat baron Larry Goodman who bought the former Bank of Ireland headquarters in Baggot Street last December for over €30 million.

Goodman’s purchase could well turn out to be one of the shrewdest property acquisitions in the present volatile market if he manages to land the KPMG contract. The same block was sold in 2006 for €212 million to a consortium led by Derek Quinlan.

1 Air travel never going ‘back to way it was’
2 Irish company to test vaccines on volunteers deliberately infected with Covid-19
3 Death of Nicholas Leonard, founder editor of Irish Times business section
4 Stripe wins more corporate customers, announces Salesforce deal
5 Coronavirus vaccine: 15 billion doses needed to inoculate the planet
6 How to . . . move (almost) everything to your new phone
7 Should I switch bank now with Ulster Bank at risk of closing?
8 Why performance appraisal systems are doomed to fail
9 Covid-19 mortgage breaks: What’s the catch?
10 Economic reasons for rise of populism will not recede
Real news has value SUBSCRIBE