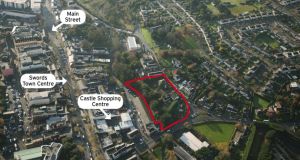 Colette Mulroy of DTZ Sherry FitzGerald is guiding €1.65 million for the site, which extends to 0.54 of a hectare (1.34 acres). It was assembled by an investment consortium and is now to be sold on the instructions of receiver Stephen Tennant of Grant Thornton.

The property has 90 metres of frontage on to Church Road and another 65 metres on to Bridge Street in an area with mixed uses.

These include the Castle shopping centre and other business premises to the east and north and the Old Vicarage residential scheme to the south and west.

The zoning under the Fingal Development Plan advocates the protection and enhancement of the special physical and social character of town and district centres and provide for the improvement of urban facilities.

Planning approval was granted in February last for the demolition of four rundown detached houses on the site and their replacement by two blocks ranging in height from four to five storeys and with an overall floor area of 11,254sq m (121,135sq ft).

There will also be 20 one-bedroom independent living units, a restaurant/cafe, retail and office units and a 101-space car park at lower ground floor level.

Colette Mulroy says she is confident the sale will generate considerable interest because of the superbly located site and the expected demand for the mixed-use scheme.