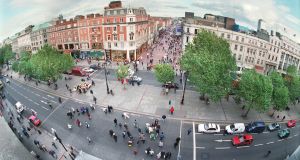 A judge has urged mediation in a row over the completion of the sale of a commercial property in Dublin’s O’Connell Street for €1.45 million.

Mr Justice David Barniville said it seemed there was a solution the parties involved could reach themselves over the row relating to the sale of 36 Upper O’Connell Street. It has a tenanted commercial unit at ground floor, vacant offices on the first and second floors and an apartment on the third.

A company called Thomclarke Real Estate agreed to buy it from Real Capital a year ago, but difficulties followed when the owners of a neighbouring property, number 35, carried out works in an area at the rear.

The area is a lightwell and allows light into the windows of number 35.

Real Capital says the works carried out to the lightwell included the opening of a door from number 35 at ground floor level, the creation of a balcony at second floor level and the installation of air conditioning ducting.

The works were carried out after the contract for sale but Real Capital says it subsequently “remediated” the works after Telstar allegedly failed to respond to a call to reverse them.

Telstar brought High Court proceedings against Real Capital seeking, among other things, a declaration it was the owner of the lightwell area. It also sought an injunction requiring Real Capital to restore the ventilation ducting.

Separately, Thomclarke Real Estate sued Real Capital seeking declarations the contract for sale was void, that the defendant was not entitled to forfeit the deposit it had paid, and recission of the contract.

Real Capital denies both claims and on Monday it applied for and was granted admission of both cases to the fast-track Commercial Court.

Mr Justice Barniville was told Thomclarke was not consenting or objecting to admission to the list while Telstar was opposed but understood the court had a discretion to admit it.

The judge was satisfied to admit both cases and adjourned them for directions on how they should proceed to next May.