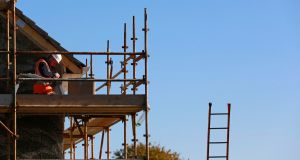 Glenveagh says it could build 95,000 homes

Glenveagh Properties, the new homebuilder preparing to float on the Irish and London stock markets next week, sees religious orders selling or entering joint ventures to develop as a key source of more than €500 million of land that could be built on over the next five years.

A draft prospectus for the company’s planned €550 million initial public offering (IPO), seen by The Irish Times, says that the company expects up to €5 billion of land to coming on the market up until 2020, providing a ready market for Glenveagh to acquire or enter into joint ventures on development property in the medium term. All told, some 95,000 homes could be built on the lands, it said.

Glenveagh is being created by combining €131 million of Irish property accumulated by US private equity firm Oaktree in recent years, and the assets of Maynooth-based builder Bridgedale. The IPO, coming a little over two years after Cairn Homes became the first Irish builder to float since the 1990s, is taking place as national home price inflation is running at an annual rate of about 12 per cent as supply continues to fall well short of demand.

Included in the €5 billion figure are an estimated 800 sites currently either State-owned or in private hands, land held by the National Asset Management Agency (Nama) and overseas private equity firms that have snapped up Irish assets following the crash.

In addition Glenveagh, where John Mulcahy, a former senior Nama official is executive chairman, estimates there are 30 sites currently in the hands of religious orders with an estimated potential for 6,500 homes.

“Currently, the competition in Ireland, especially for lots and values of around €10 million and over, is relatively limited, with the market fragmented and a dearth of local housebuilders with equity capital or access to equity capital or other forms of funding,” the document said.

“The group believes that the equity capital it will receive upon completion of the offer will differentiate it from almost all other industry participants in the greater Dublin area and will enable it to continue to assemble its land holdings and grow its business profitably.”

Cairn Homes has been a beneficiary of religious orders selling property. It is currently in the middle of developing high-end apartments and houses on a site bought from the Redemptorist Order in Rathgar in Dublin two years ago. It also plans to lodge a planning application in the coming months on lands formerly owned by the Christian Brothers on Griffith Avenue in north Dublin which it bought last year.

Meanwhile, the draft prospectus has warned potential investors that any move by the Government to row back on its help-to-buy scheme may have a “material adverse” impact on its business, given that half of its developments will be aimed at first-time buyers.

Minister for Housing Eoghan Murphy indicated during the summer that the scheme, which was launched in January and allows first-time buyers build up a deposit for a new home by way of as much as a €20,000 tax refund, may be scrapped.

There is speculation that the scheme may be tweaked in next week’s budget, with the State possibly taking equity in homes in future, rather than providing grants.

Glenveagh estimates it will have about 1,700 “shovel ready” units when it floats, and plans to be building at least 1,000 homes a year by 2020. It aims to build 2,000 new houses and apartments a year “in the longer term”.

The company’s founding directors – Mr Mulcahy, chief executive Justin Bickle, who is also chairman of a company used by Oaktree to hold Irish property bought in recent years, and chief operating officer Stephen Garvey – have been given an incentive scheme that allows the men to receive up to 20 per cent total shareholder returns over a five-year period.