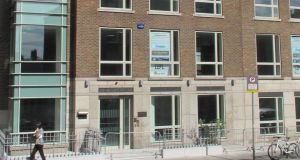 Pembroke House: let to IRB for €484 a square metre.

The International Rugby Board (IRB) is to move to a new headquarters building at 8-10 Lower Pembroke Street in Dublin 2.

The organisation will be paying a top rent of €484 a square metre (€45 a square foot) for the newly upgraded building, Pembroke House, which has an overall floor area of 1,467sq m (15,791sq ft) over five levels. There are 21 car-parking spaces to the rear which are to be rented at €3,250 each. The 20- year lease includes a break option for the tenant in the 12th year.

The IRB has been based in Huguenot House, near the Shelbourne Hotel on St Stephen’s Green, for several years.

Pembroke House was previously rented by software company Fineos and Iona Technologies. The building was refurbished in recent months by owners G &T Crampton, the Dublin construction company. Deirdre Costello of JLL handled the letting for the owners.

The IRB, rugby’s world governing body, was founded in 1886 by the unions of Scotland, Wales and Ireland. England joined four years later.