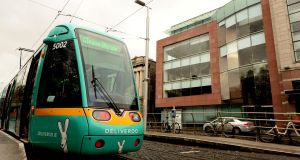 Recruitment website Indeed. com is to relocate its Irish operation to a high-profile modern office building next to the Fitzwilliam Hotel at 124/127 St Stephen’s Green in Dublin 2.

The company already employs 230 staff and plans to recruit another 300 over the next two years for its Dublin operation which serves as the headquarters for Europe, the Middle East and Africa (EMEA).

Indeed is initially to rent 5,574sq m (60,000 sq ft) on the third, fourth, fifth and sixth floors of the 11,765sq m (126,637sq ft) building which was initially used as Irish headquarters for the Bank of Scotland (Ireland). Once the bank decided to wind down its Irish operation, the offices were passed over to Certus, an Irish specialist loan servicing group, which was given the task of selling off the bank’s extensive loan portfolio. At its height in 2010 the loan book stood at €27.4 billion.

Certus’s success in off-loading the legacy loans has allowed the management to drastically reduce staff numbers over the past year. The company continues to have the use of the meeting rooms on the ground floor as well as the first and second floors but the expectation is that these floors will eventually be made available to Indeed. That company, like Certus, will be paying a rent of €484 per sq m (€45 per sq ft) and €3,500 for some of the 46 parking spaces in the basement. A rent review due since December 2014, is expected to take place in the coming weeks.

Indeed’s arrival in St Stephen’s Green comes just as the three owners are to sell a one-third share in the building which is producing an overall rental income of €5.4 million. Clive Roche of DTZ Sherry FitzGerald has called for final offers for the shareholding which is expected to make in excess of €25 million.

The building was developed in 2005 by the daughters of the hotelier PV Doyle, Bernie Gallagher, Eileen Monahan and Ann Roche. It is one of the best located office blocks in the city, a few hundred metres from the top end of Grafton Street and across the road from the Green Line Luas terminus.

It was widely speculated that the late PV Doyle bought the site to make sure it wouldn’t be developed for a hotel in competition with his nearby Westbury, off Grafton Street. The site remained derelict for 20 years, much of it occupied by the Green Cinema which is fondly remembered as the first in Ireland to have double seats – a risqué thing at the time.

The building is close to the former Hibernian United Services Club on St Stephen’s Green which was one of the great bargains of the property crash when it was sold in the summer of 2013 for a mere €7.8 million. The listed Georgian building with the most prestigious business address in the city was originally acquired by the late Hugh O’Regan for €10 million. He spent almost as much again on upgrading it with the intention of reopening it as a club for young businespeople. The global insurance company XL Group bought it for a song.

1 State subsidises public sector retirees to cover gap until State pension
2 Who are Ireland’s 17 billionaires?
3 My father in a nursing home wants to gift me his house
4 Are there annual limits on inheritances or gifts to a child?
5 Trump holds America up as ‘example for the world’
6 Central banks join forces to look at future digital currencies
7 Corporate tax change is inevitable, says Donohoe
8 Countries that fail to attract immigrants will lose out – Microsoft chief
9 Cubic Telecom raises more than €11 million in funding
10 Nama lends Cosgraves €15m to fund huge apartment development
Real news has value SUBSCRIBE