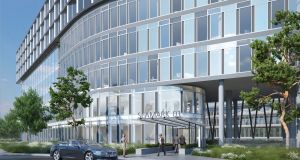 The Seamark will have high-grade air conditioning and a clever layout to provide an occupational density of 8 sq metres per person.

US investor Starwood Capital Group and Irish developer Chartered Land are launching a marketing campaign today to find tenants for the newly named Seamark Building at Elmpark Green campus on the Merrion Road in Dublin 4.

Agents CBRE and Colliers International are quoting a rent of €425 per sq m (€39.50 per sq ft)–a significant discount on those in Dublin’s central business district – for space in the eight-storey block which is located at the front of the site with views of Dublin Bay.

The eight-storey block extends to 16,940 sq m (182,500 sq ft) and, when fully developed in the final three months of this year, can be seamlessly split to facilitate two fully independent office blocks featuring separate double height glazed reception areas. Alternatively the building can be combined to provide a single headquarters building. Occupiers will have the use of 161 car parking spaces at a rent of €2,500 per space while fitness enthusiasts will be able to avail of 342 showers and high-quality changing areas.

The Seamark will have high-grade air conditioning and a clever layout to provide an occupational density of 8 sq metres per person.The block also benefits greatly from the availability of natural light on all floors. Henry J Lyons has been engaged to handle completion of the block while Bucholz McEvoy Architects, the original designer of Elmpark, have been appointed to look after the planned improvement of landscaping amenities.

The mixed use Elmpark campus is currently used by around 3,000 people. This figure is expected to grow to 4,600 once the Seamark Building is occupied. Facilities in the campus include apartments, coffee shops, childcare centre as well as leisure facilities. The office tenants include Allianz, Novartis, Wipro and Willis.

Andrew Gunne, chief executive of Chartered Land, said that on completion of the work on Seamark Building it would provide modern office accommodation for medium to large-sized corporate occupiers looking to take new space at a healthy discount to rents in the central business district.

The two letting agents, Alan Moran of CBRE and Nick Coveney of Colliers, said that considering the companies who were already based in Elmpark Green and the quality of the environs it was easy to understand why Seamark Building had already generated considerable interest.

“The fact that the building is easily divisible gives us great flexibility on a lease up strategy.”

Elm Park was developed in 2007 by Bernard McNamara, Jerry O’Reilly and the late David Courtney. It was subsequently sold to Starwood Capital Group by Nama for around €185 million. The sale was handled by DTZ Sherry FitzGerald, now trading as Cushman & Wakefield, and Savills.