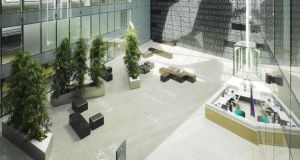 Irish Life’s purchase of 2 Grand Canal Square will be seen as a landmark deal at a time when rents seem set to rise significantly.

Fears that the commercial property investment market is overheating have emerged following the sale of an office block in the south Dublin docklands for €121 million – €41 million above the guide price. Irish Life, which bought the relatively new block at 2 Grand Canal Square against strong competition, will have to settle for a net return of less than 4 per cent on the investment.

Office investment yields generally ranged between 7 and 8 per cent for modern blocks when the National Asset Management Agency (Nama) began selling off distressed properties in 2012. Net returns have steadily fallen since then because of intense competition between a range of overseas companies and Irish funds for high-profile office blocks, particularly those with international tenants or strong Irish covenants.

Two other Dublin office buildings and a row of shops also sold this week at substantially more than the guide prices. The recovery in office values in particular has also allowed a US fund sell on an office block bought two years ago from Nama at a profit of €15 million.

Irish Life’s purchase of 2 Grand Canal Square will be seen as a landmark deal at a time when rents seem set to rise significantly. Irish Life was in competition with six other funds for the eight-storey over basement block overlooking Grand Canal Square, which is under-rented at €312 per sq m.

Rents for high-quality buildings such as it are expected to rise to at least €484 per sq m over the next year. The 14,000sq m block is currently producing annual income of about €4.44 million.

The main tenant, Capita Financial Services, is occupying 4,830sq m in the building and is to be joined next October by William Fry solicitors, which will rent 8,639sq m. The rental income will rise when a number of ground floor suites are let.Bord Gáis is paying a rent of €2.1 million a year, equating to a base rent of €392 per sq m.

Chartered Land, which owned the block, is also understood to have secured in the region of €43 million – almost €20 million more than the guide price – for One Clarendon Row, a six-storey over double basement office and retail building on South King Street that has been bought by Lone Star, a US property investment fund.

The sale includes a 10 per cent interest in the retail element where Warehouse, H&M and Zara hold long-term leases. The mixed-use block, rented at €1.3 million a year, will give the new owners a net return of of less than 5 per cent.

Earlier this year Lone Star acquired the remaining 90 per cent loan on the three fashion stores from the former Anglo Irish Bank.

Hibernia REIT has also emerged as the top bidder at €53 million – €13m above the guide – for the Observatory, a six-storey office block at Sir John Rogerson’s Quay in the south Dublin docklands which was developed by Bernard McNamara and Derek Quinlan just as the property market crashed in 2007.

The yield in this case is likely to be under 5 per cent. Hibernia REIT recently paid €7 million for a one acre site at the rear that originally housed a recording studio; and a further €20 million for an adjoining office block rented by Bank of New York Mellon.

US property fund Northwood Investors is about to make a profit of €15 million on its purchase from Nama of the Dublin headquarters of Bord Gáis more than two years ago.

The fund is due to complete contracts early next week on the sale of the office block at 1 Warrington Place to Irish Life for €42 million.

It is understood to have availed of vendor funding of up to 70 per cent of the loan-to-value. The investment will show a net return of 4.85 per cent for Irish Life.