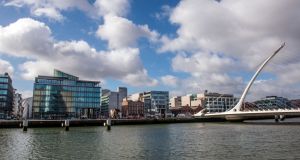 The agent also says prime office rents in the capital are returning to boom rates. It predicts office rents in Dublin will rise by 18.2 per cent from 2015 to 2018, behind Madrid, Mumbai and San Francisco, but well ahead of London, LA, Hong Kong, Paris, Tokyo and New York.

Speaking at the publication of a report into the future of real estate in major world cities, Declan O’Reilly, the agent’s commercial director for Ireland, said that while smaller than many cities in the study, Dublin had similarities with them.

As a city that has attracted many of the world’s top tech firms, the capital faces many of the same pressures that cities such as San Francisco and London have, he said, not least providing living and working space in the centre.

“It used to be that when it came to office relocations you just looked at where the chief executive and chief finance officer lived and which train station they commuted into and that was where you ended up. Now companies are worried about where younger employees want to be and that’s typically close to the city,” he said, citing the rise in areas such as Shoreditch in London.

“If you are a Google or a LinkedIn, then there’s a war for talent on and the people you are hoping to attract want to work in the city centre and to live near to where they work. Companies want to place their business in areas where they are most likely to attract key employees and increasingly that is in the city centre,” he added. He said that, as with other cities, Dublin could either grow outwards or upwards.

“You get a company like Google coming here and they typically take a relatively small amount of space initially, but they all want to be in a city that will enable them to expand. In Dublin we don’t have a lot of spare buildings and the problem is that the funding side of speculative development is not happening. We need a debt market and don’t have one,” he said.

Mr O’Reilly said that Dublin’s prime office rental market was bouncing back from the recession, when rates fell to as low of €25 a square foot.

He noted the Denis O’Brien-funded LXV building on St Stephen’s Green achieved a new benchmark of €60 a sq ft earlier this year.