Developers claim Nama will cause ‘state of crisis’ 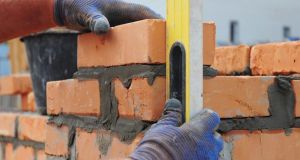 Five leading property developers have told the European Commission that the market for new houses in Ireland is likely to “descend into a state of crisis” by the time the National Asset Management Agency winds up operations in 2020.

They said this is because so few non-Nama builders and developers will still be in business by that stage, due to an inability to compete on level terms with the State agency.

“When Nama is eventually wound up, the market for new houses is likely to descend into a state of crisis far more severe than the current situation, as a result of the lack of surviving property developers who are capable of producing the volume of housing required annually,” the developers state in their complaint to the commission, which was filed on Friday.

The complaint was filed by developers David Daly, Paddy McKillen and Michael O’Flynn, and by Dublin-based companies New Generation Homes and MKN Properties.

They note that Nama is due to wind down its activities in 2020. In the meantime, they say many developers not supported by Nama will have exited the market because of an inability to compete with the agency in terms of its cost of funding.

They say Nama’s cost of finance is about 2.5 per cent and that the agency lends money to its debtors, as part of work-out agreements, at 5-6 per cent.

By contrast, developers not supported by Nama can expect to pay 14-15 per cent for funding. The developers say Nama’s low cost of capital is a result of its having the benefit of a State guarantee when borrowing.

The complaint follows a recent announcements by Nama and the Government that the agency would build 20,000 new homes, mostly in Dublin, between 2016 and 2020.

This will require funding of €5.6 billion, with peak funding expected to be €1.8 billion. The homesare aimed largely at first-time buyers.

No comment on the complaint was available from either Nama or the Department of Finance. It is understood that Nama had anticipated some form of challenge and is confident that its house building plan does not breach EU rules.

At its announcement last week, Nama said it could seek joint venture partners to de-risk the housing programme and could work with “non-Nama platforms”.

However, the agency said it could fund the construction work itself.