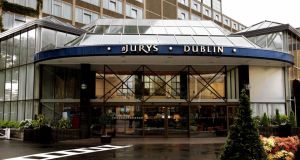 Ulster Bank has chosen a consortium including Joe O’Reilly’s Chartered Land as the preferred bidder for the Ballsbridge hotel sites that were acquired by bankrupt Carlow developer Sean Dunne in the property bubble years.

It is understood that Chartered Land and an international investment group, possibly from the Abu Dhabi sovereign wealth fund, has offered to pay more than €170 million for the prime 6.8 acre site, which was assembled by Dunne at a cost of €400 million in the boom years with funding from Ulster Bank.

A recommendation has been made by Ulster Bank to its parent group, Royal Bank of Scotland, and an announcement is expected in the coming days.

The underbidder is believed to have been London & Regional, a former owner of the Four Seasons hotel in Ballsbridge.

Others in the final stage of bidding for Project Trinity were Irish builder Cairn Homes, which recently floated on the London stock market, Colony Capital in partnership with leading Irish businessman Paddy McKillen, and US investment group Capstone.

Mr Dunne had acquired the sites from the Doyle hotel group during the Celtic Tiger years and had planned to create a Knightsbridge-style quarter in Dublin 4.

This plan met with substantial opposition from locals and was ultimately scuppered by the global credit crunch and the collapse of the Irish property market in late 2008.

There is a 10-year grant of planning permission to construct a 1.5 million sq ft urban quarter comprising 490 top-end apartments, a 152-bedroom hotel, and associated retail and commercial space, and community facilities. The permission expires in 2021, and the development will include 11 residential blocks.

The site currently houses the Ballsbridge and Clyde Court hotels, which are operated by listed Irish hotel group Dalata under short-term leases.