Developer David Daly back with Ballsbridge office for rent 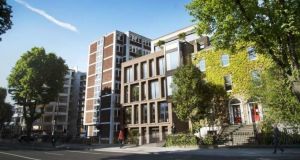 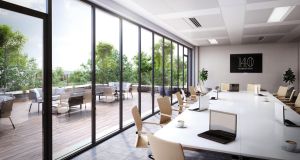 A conference room and balcony at 140 Pembroke Road in Ballsbridge, a six-storey office block 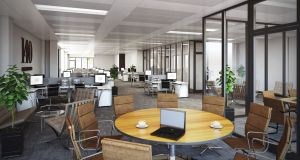 Interior offices in the newly developed 140 Pembroke Road in Ballsbridge

A newly built office block next to Hume House in Ballsbridge, Dublin 4, which goes for letting from Wednesday, will mark the return of David Daly to the Dublin development sector after nearly a decade.

Mr Daly’s Albany Homes was one of Dublin’s largest and most successful housebuilders before the property crash; he had also assembled a substantial portfolio of commercial properties.

Lisney is launching a marketing campaign today for 140 Pembroke Road, which has been fitted out to the highest standards and is available for letting at €624/sq m (€58/sq ft).

The six-storey, over-basement block has an overall floor area of 2,322sq m (25,000sq ft), making it an ideal headquarters for a company with 200- 250 employees. The building has triple-glazed windows, floor-to-ceiling heights of 2.9m, raised access floors, suspended ceilings, Concept bathroom fittings and an A3 BER rating.

140 Pembroke Road has been developed on a site previously occupied by Franklin House, which was sold for €25 million by property developer Gerry Gannon in 2006.

Maeve Furlong of Lisney says that many of these developments will offer building sizes in excess of 50,000sq ft – about double the size of Mr Daly’s new building.