Developments along the quays helping to advertise opportunities offered by city 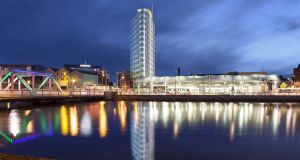 “If Apple was coming to Cork today it wouldn’t be going up to Hollyhill; it would be directed to all that space in the docklands which, incidentally, has always been a generator of employment in Cork.”

Sean Kearns of Reddy Architecture and Urbanism sees a symmetry in the surge of planning, building and proposals for Cork’s city centre and its riverside. Apple remains at Hollyhill, but new technology is now being housed in the city centre in a series of radiant buildings replacing the mills and silos of a maritime past. “There were 6,000 people employed on the docks up to about the 1980s; now more than that are arriving, but into offices.”

To understand the divisions of the city centre a little geography is necessary. The commercial and retail core was built on what was once a waterway curving through the town. This core area now also includes Patrick Street, Grand Parade and the South Mall, in a landscape complicated by the separation of the river Lee into north and south channels which unite again at the peninsula of the Customs House Quay.

So while nothing much will be docking at the city docks after the final relocation of the Port of Cork to its harbour berths at Ringaskiddy, the developments along north and south quays of the divided river revive many of the prospects envisaged 10 years ago by City Hall and then dislodged by the recession.

Those plans and that vision have been encouraged afresh by the Government’s Project Ireland strategies and targets. Deputy chief executive of Cork City Council Patrick Ledwidge is also the council’s director of services for strategic planning and economic development; now about to retire, he can point to the provision of 9,000 jobs through permitted developments so far. “All companies are looking for 20,000sq ft on a single floor, but that can only be accommodated in certain parts of the city.”

“Confidence is key,” says Sean Kearns, “and also making sure that we design to a high quality. The buildings coming along will be equal to any in Europe; they have to be because the level of investment is so high and the risks are so great that it takes a lot of courage to buy a site and develop a building which is going to impact on the city for a long time.”

Kearns makes it clear that the new structures act like a billboard: “We’re advertising ourselves by our own city. One of the key elements in the 2040 project is regional development to counterbalance growth in Dublin and as our marketplace is smaller we’ve a bigger chance to show off.”

While it seems as if Cork will soon have more towers than Camelot and more sections than a satsuma, there may also be a sense that the narrative of the city’s past is being obscured.

The terminology of planning and building doesn’t allow for the inexpressible, what John Ruskin called “social affection”, a phenomenon often derided by those engaged in energising a city.

While the language of change speaks of next generation architecture and gold-standard LEED specifications, the glamour of a newer skyline can’t yet hide the legacy of the physical past.

On the north bank, Horgan’s Quay fills in disused railway yards; “Coroner” John J Horgan was a solicitor, author, journalist and influential member of the Cork Harbour Commissioners for 52 years.

Penrose Dock was the premises of the St George Steam Packet Company, which accounts for the impressive figurehead of St George and the Dragon on the building’s pediment. The name recalls the late 18th-century Quaker and connoisseur Cooper Penrose, whose home at nearby Tivoli included an art gallery and arcaded gardens where Sarah Curran found refuge after the arrest of Robert Emmet.

And the 1884 extension of the premises of what later became the Crawford College of Art and Design was named in honour of its sponsor William Horatio Crawford, the philanthropist, gardener and brewer whose business with Beamish at the South Gate Bridge is now being developed by Bam Ireland.

The glitter of glass and steel shining above the quays prompts the question: where will people come from to inhabit these buildings? The answer is that they’re already here. “Forty-two per cent of the city’s residential population is non-Irish,” says Ledwidge, endorsing Sean Kearns’s estimate that 50 per cent of his office staff are from outside the country: “The jobs will be the attraction, and Cork will be a nicer place to live.”

Clontarf Street: Planning permission for the Clontarf Street Developments Prism building designed by Reddy Architecture and Urbanism is under appeal with An Bord Pleanála. If allowed it will provide a triangular tower of 15 floors on a compact site next to the city’s main bus station. This would mark Kerryman Kevin O’Sullivan’s introduction of his Tower Holdings Group to Cork’s development scene.

Sullivan’s Quay: Permission for Bam Ireland’s 12-storey cylindrical tower hotel plus a six-storey office block has been confirmed by An Bord Pleanála, following delays to development since 2009. Architects Scott Tallon Walker are again involved with this site of the demolished offices of the Revenue Commissioners. A 200-bed hotel on 22,000sq m of riverbank will stand opposite Bam’s event centre on South Main Street.

Port of Cork: The site of the protected Customs House and Bonded Warehouses has been bought by New York-based Kevin O’Sullivan’s Tower Holdings Group subject to planning permission. The initial suggestion of a 30- to 40-storey tower on the quay has been scaled back and the design team to be appointed shortly will include an international architect working with local firms in a package of 60 components. The plans for hotel, office and residential accommodation are currently under discussion with City Hall.

UCC Centre for Executive Education, 1 Lapp’s Quay at eastern corner of Parnell Place: Built in 1842, like several other buildings which distinguish the South Mall this has a classical façade and a banking hall with stucco decorations and fittings of Spanish walnut. The premises was bought by Cork City Council for €850,000 in 2014, and then sold two years later for €1.4 million. Now expanded to ancillary buildings on Parnell Place in a development plan by UCC employing conservation architect Gareth O’Callaghan. The UCC centre opened in late 2018. UCC is also understood to have acquired the 1.5-acre Brooks Haughton site at Copley Street for the relocation of Cork University Business School from the main campus to the city centre.

Maldron Hotel, South Mall and Parnell Place: A €30 million development (including €1 million for the site) of a new hotel with 163 bedrooms run by Dalata Hotel Group. Six floors in a design by Reddy Architecture and Urbanism, completing an earlier plan from James Leahy Architects. Opened December 2018.

97 South Mall: John Cleary Developments (JCD) has installed Eventbrite as the tenant at this former Provincial Bank of Ireland with the finest classical exterior on the South Mall or even in Cork – a grand Italianate frontage in dressed silver limestone with columns, pediments and carvings. Interior includes a galleried banking hall. Refurbishment now accommodates 10,000sq ft of office space over three floors by Reddy Architecture and Urbanism. (A planning application has been lodged recently for a boutique hotel at 71 South Mall, former National Irish Bank, another decorated limestone classic.)

85 South Mall: In a street long serving as the commercial, legal and financial centre of the city, with the Imperial Hotel and a scattering of sandwich bars catering for all associated clients, the offices designed by Henry J Lyons for JCD provide 46,500sq ft over five floors for major tenants KPMG and Forcepoint.

CIT Crawford College of Art and Design: 46 Grand Parade at the western junction with the South Mall covers 13,000sq ft over four floors. Built in 1840 and extended in the 1850s, the building was most recently bought for €1 million by CIT for postgraduate students of the CIT Crawford College of Art and Design at Sharman Crawford Street, with another € 1 million for refurbishment in a design scheme from architect Susan Brennan.

1 Albert Quay: Close to City Hall and leading the way since 2016, this €58 million office block from JCD provides 170,000sq ft over seven storeys in a design from Henry J Lyons. Tenants include Arup, OPW and Ardmore Shipping. JCD also developed the five-storey, €50 million Capitol site, which stretches 99,000sq ft from Grand Parade to Patrick Street, with Wilson Architecture. With 40,000sq ft of retail space, it could bring some vitality to the depressed retail scene in Patrick Street.

Navigation Square: The alternative to the late Owen O’Callaghan’s proposed event centre. Henry J Lyons has instead designed a four-unit complex over six floors with 310,000sq ft of office accommodation on a 2.25-acre site which once housed a docks warehouse. A major tenant will be Clearstream, moving from its airport location and adding 200 new jobs.

Penrose Dock: JCD is building 250,000sq ft of office space in two blocks over nine floors with Wilson Architecture. The €125 million scheme includes the protected former St George Steam Packet Company offices of 1833, to be refurbished as a standalone feature of the development.

Horgan’s Quay: A €160 million scheme for Clarendon Ireland and Bam Ireland of eight buildings in former CIÉ lands. The development involves three architectural firms in O’Mahony Pike’s masterplan, with Reddy Architecture and Urbanism involved in the residential component and Wilson Architecture involved in a 136-bed hotel. The total development of the six-acre site will work out in phases of the 10-year permission.