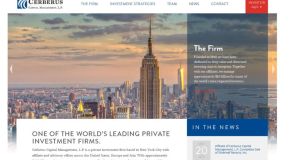 The website of Cerberus Capital Management, which states the private equity firm has some $25 billion (€22.5 billion) in assets under management.

Cerberus Capital Management, the US private equity firm that bought billions of euro worth of Nama loans last year, has said it did not make any improper payments or pay any illegal fees in relation to the deal.

It said it was “deeply troubled” by the allegations made in the Dáil by Independent TD Mick Wallace, “and we want to make it clear that no improper or illegal fees were paid by us or on our behalf and we take any allegation to the contrary extremely seriously”.

The firm said its lawyers in relation to the deal were the US firm Brown Rudnick, though it was aware that that firm was using the services of Belfast-based Tughans solicitors.

It was advised that Brown Rudnick would be paying Tughans “out of their fees. Cerberus has never paid Tughans.”

Cerberus, which has its headquarters in New York, has some $25 billion (€22.5 billion) in assets under management, according to its website, and invests mainly in distressed securities and assets, private equity, middle-market lending and real estate.

The deal with Nama closed in June 2014. In December 2014 Cerberus closed a £1.1 billion (€1.54 billion) deal with the Royal Bank of Scotland Group over another portfolio of Irish real estate loans.

While the Nama loan book sold to Cerberus had a book value of €5.7 billion and was sold for €1.6 billion, the loss incurred by Nama was approximately €200 million, a Dáil committee was told last May.

Nama’s chief executive, Brendan McDonagh, told the Public Accounts Committee it had made a €200 million loss on the sale to Cerberus.

The agency paid €2 billion to various banks for the loans which had a face value of €5.7 billion, he said. He confirmed it sold the loans to Cerberus for €1.6 billion, after receiving €200 million in income prior to the sale.

‘A lot of attention’

Frank Daly, the Nama chairman, told PAC the sale received “a lot of attention” from the board of Nama and it was satisfied with the price.

“In terms of the outcome, both in terms of the pricing and in terms of achieving that outcome in the sensitive situation where we were . . . from the board’s point of view it was quite a satisfactory item,” said Mr Daly.

While the bulk of the comments made in the Dáil on Thursday by Mr Wallace had to do with former members of the Nama Advisory Committee in Northern Ireland, Brian Rowntree and Frank Cushnahan, Nama said they had no involvement in the sales process.

Efforts to contact Mr Rowntree and Mr Cushnahan on Friday were unsuccessful.

Mr Wallace queried why they remained on the Nama committee after they had resigned in 2012 from the Northern Ireland Housing Executive against a backdrop of controversy over land sales.