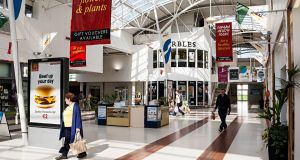 A shopping centre on the outskirts of Limerick city with around 60 per cent of the retail space vacant has been sold on behalf of Nama for €3.425 million – more than 50 per above the guide price of €2.2 million.

The main enclosed mall is laid out predominantly over one trading floor although some units have additional space at mezzanine level and a few trade from the first floor. The centre is anchored by owner-occupier SuperValu who trade out of 3,994sq m (43,000sq ft).

The shopping centre was producing a rental income of €365,000 per annum but service charge voids reduced the net income to €200,000.

However, Conor Whelan of QRE said there was huge scope to enhance the value of the centre by leasing the remaining units on competitive terms and reducing the serviced charge voids. He said his agency had received numerous inquiries from traders looking to lease shop units.