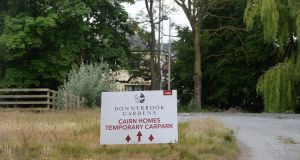 Cairn Homes has agreed in principle a €30.175 million deal to sell 61 apartments to Dublin City Council for social housing from its planned development on former RTÉ lands at Donnybrook in Dublin 4.

The builder has lodged “fast track” plans for its €338 million Project Montrose with An Bord Pleanála to secure planning permission for 614 residential units.

Now, as part of its obligations under Part V of the Planning and Development Act, where it is required to allocate 10 per cent of any new private development to social housing, Cairn Homes has reached a deal with Dublin City Council concerning its plans.

In a letter dated May 20th to Cairn Homes from Dublin City Council presented to the appeals board, senior council official Natasha Satell stated that Cairn Homes has engaged in Part V discussions with the council “and an agreement in principle to comply with their Part V requirement has been reached”.

Ms Satell added that “therefore, Dublin City Council can only agree in respect of the actual permitted development”.

The apartments put forward by Cairn are comprised of 37 one-bedroom units and and 24 two-bed units.

The Part V apartments are to be located in one eight-storey block in the scheme.

A spokeswoman for Cairn Homes confirmed on Thursday that last year the company sold 133 homes under Part V to local authorities at an average selling price of €224,000 – which translates to a total of €29.79 million.

Planning documentation with the application states that Project Montrose represents “a once-in-a-lifetime opportunity for a landmark development in one of Dublin’s most desirable neighbourhoods”.

It goes on to say that the scheme “offers a unique vision for sustainable development in a parkland setting” and will provide for a series of taller “villa” style buildings fronting the Stillorgan Road with a perimeter of lower “pavillon” buildings along the rear boundary.

The proposed scheme is comprised of 611 apartments across nine buildings ranging in height from four to 10 storeys. It also includes three townhouses, one childcare facility and two cafes.

Third parties can now make submissions on the plan and An Bord Pleanála is due to make a decision on the planning application by September 15th.

Asked about when construction might be expected to start if planning comes through, the spokeswoman for Cairn Homes said that “given the application is still in process it would be too premature to discuss timelines”.

1 Belgium helps Ireland to a Brexit boon
2 ‘My rent here is so low it’s a joke’
3 This charming man: how Paschal Donohoe won the Eurogroup presidency
4 Can Grafton Street stop the flood of closures?
5 ‘Sad day’ for House of Ireland as tourism retailer goes out of business
6 AIB to compensate another 1,100 tracker mortgage holders
7 New Powerscourt Springs hotel to open in defiance of virus gloom
8 Goodbody’s planned €155m sale to Bank of China falls through
9 Banks will be judged less on payment breaks and more on next step
10 What is Covid Tracker Ireland?
Real news has value SUBSCRIBE