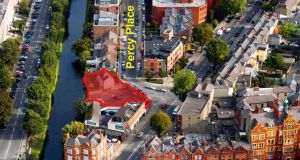 An infill development site with planning permission for a mixed-use development at Percy Place, Dublin 4, bought just before the property crash for €13 million, is back on the market at a guide price of €2.25 million – a drop of around 83 per cent.

The former coal yard was bought by John Lally of Lalco Developments, who later paid a reported €25 million for the upmarket Humewood Castle in Wicklow at the peak of the boom.

In 2006, he also hit the headlines when he paid €110 million for the five-acre FAAC site in Sandyford which has not since been developed.

Paul Callanan of CBRE is handling the disposal of the Percy Place site just off Haddington Road which extends to 0.1 of a hectare (0.25 of an acre) and backs on to the Grand Canal.


Planning permission
The surrounding area is predominantly commercial in character with a number of high value residential developments still in keen demand.

There is presently a derelict house on the site while the old coal yard is used for short term car-parking. The site is partly zoned for mixed uses and residential.