Also in the news were budget submissions, AIB, Ardagh and INM 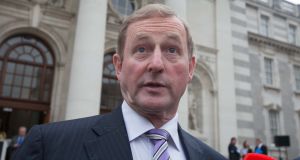 For so long the good boys in the class, the Government remained firmly on the European Union’s naughty step this week as the fallout from the European Commission’s ruling on Apple continued unabated.

Following the State’s move to appeal last week’s record finding by the commission that the Republic granted Apple €13 billion in illegal state aid, there were a number of encounters between Government Ministers and EU officials.

Commission vice-president Andrus Ansip met Taoiseach Enda Kenny and Minister of State for European Affairs Dara Murphy. Speaking to The Irish Times ahead of his visit, Ansip dismissed the soundings that had been coming out of Government circles since the decision, and said the case taken against the Republic was “based on facts”.

“I think we all would like to have fair competition in the European Union, ensure that all players, all companies have to be treated equally – the same applies to Apple,” he said. “If one restaurant, for example, has to pay all the taxes according to law, and a restaurant next door does not, what kind of fair competition is that?”

Kenny also had to contend with European Council president Donald Tusk, and said the pair “had a conversation” about the judgment even though it was outside the confines of the meeting’s agenda.

“I had a conversation with president Tusk at the beginning of our meeting here today and I explained to him the reasons and the background to the situation insofar as the European Commission making its decision about Apple is concerned,” said Kenny.

The Taoiseach is likely to find himself at loggerheads again with Europe down the road with new plans for further “cross-border harmonisation” of tax rules across the EU being discussed.

With Dublin sure to oppose such moves, Minister for Finance Michael Noonan is likely to have received a frosty reception when he arrived in the Slovak capitalBratislava on Thursday ahead of his first face-to-face meeting with EU finance ministers since the judgment.

Minister for Jobs Mary Mitchell O’Connor took some time out from snipping ribbons to say she had been contacted by a number of US multinationals expressing concern about the ruling.

Stopping short of the red carpet and harpist on this occasion, she nonetheless moved to soothe the worries of the job creators and said the Republic’s sacred corporate tax rate would not be compromised.

“We profoundly reject the European Commission’s findings, and the Government has together decided that we will appeal the findings,” she said. “We totally reject that there was State aid or that there was a special deal done for Apple.”

Interestingly, close Kenny ally and Irish European Commissioner Phil Hogan felt Brussels was far enough away from Dublin for him to reject Government claims that the judgment was an attack on the Republic’s corporate tax practices.

“It has to do with state-aid rules, and the interpretation of the European Commission is that the tax structures that were established by one particular company has implications for state-aid rules,” he added.

Rating agency Fitch unsurprisingly had a more measured analysis of the lay of the land. It said the ruling would have mixed implications for the Republic and played down the risks to inward investment. “It could result in a substantial one-off improvement to Ireland’s fiscal position,” it said.

“But [it] may also add to medium-term economic uncertainty and increase political risks . . . If used to pay down debt and/or reduce borrowing rather than spent, this would accelerate the improvement in public debt dynamics that has been driven by fiscal consolidation and robust nominal growth.”

The Government begrudgingly acknowledged that the State would have to accept the €13 billion award in the Apple tax case if the appeal failed.

The Department of Finance said the Revenue Commissioners is now obliged to collect the €13 billion and it will be put into an escrow account. If the appeal is successful, the money will be returned to Apple. However, if the commission’s decision is upheld, it conceded: “The sum will be paid to the Irish State.” It’s a cruel world.

Of course, the timing of all this couldn’t be much worse for the Government with a budget next month. Every lobbyist in the State is sharpening knives as they prepare to fight for the biggest pieces of the pie.

Fair enough, the Republic this week raised €1 billion in 10-year borrowings at a record low rate of 0.33 per cent, taking advantage of the extraordinarily low interest rates at play in international markets.

But Central Bank governor Philip Lane has stressed the need for prudence in the budget, warning the Government not to base spending plans around temporary spikes in tax revenue.

The State’s fiscal watchdog also chimed in, warning that the Government’s planned budgetary adjustment this year would end up being substantially larger than the €1 billion previously flagged.

The Irish Fiscal Advisory Council claimed that when added to new spending commitments in health and education, the total package of measures earmarked for Budget 2017 would, in fact, amount to a €2.4 billion adjustment.

It has been a turbulent few years for AIB but the State-owned bank’s chief executive, Bernard Byrne, this week proclaimed: “We have fixed the bank.”

In a speech delivered to the Leinster Society of Chartered Accountants, Mr Byrne said it was now ready for a long-awaited stock market initial public offering (IPO) whenever the Government decides to pull the trigger.

“We have fixed the bank, we’ve done the work, we’ve remediated the issues and we’ve made it more efficient,” he said. “Our challenge now is to move to the next phase. It’s about being quite different into the future as we face into a different competitor set.”

Another company preparing itself for the stock market is packaging company Ardagh, which told bondholders about plans to raise up to €270 million through floating part of the business on the New York Stock Exchange in a move that would value the group at €4.5 billion. Sources close to bondholders said the group planned to float 5 per cent of the shares in its operating company on the market in the first half of 2017.

Denis O’Brien-controlled media giant INM continued to extend its reach this week with the acquisition of the publishing division of Celtic Media Group, which comprises six weekly regional newspapers, a biweekly newspaper and a pre-press service.

Its regional titles include the Anglo Celt, the Connaught Telegraph, the Meath Chronicle, the Offaly Independent, the Westmeath Examiner and biweekly newspaper and website Your Forum. The move increases the company’s regional titles from 13 to 20.