Miriam Lord: Welcome to the House of Funds budget for Brexit madness 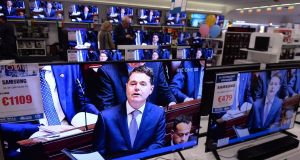 In his Budget 2020 speech, Minister for Finance Paschal Donohoe promised a variety of financial “interventions” for sectors hit by the UK crashing out of the European Union. Photograph: Alan Betson

In the event of a no-deal Brexit, there will be a sudden swing from surplus to deficit. Government funds will drop from the panel above your head. Pull the funding towards you and place securely over your rapidly-dwindling business, making sure to carefully fasten all documentation before looking for the grant.

Do not panic. Things may be serious, but Paschal Donohoe is here to cushion the impact. He explained the safety drill in soothing tones on Tuesday when introducing his “In the Event of a No-Deal Budget” budget.

Gently sounding a muffled klaxon, the Minister for Finance sighed: “Brexit has now shifted to no deal as our central assumption.” This is far worse than last year when we still imagined some sort of soft landing on the B front would materialise.

“I acknowledge that where we find ourselves today is not where we want to be,” is what the Minister for Finance said at the end of that budget speech. He’s not over the moon now either.

“Yet, here we are” were his defiant closing words on Tuesday. But they had nothing to do with Brexit. It was a pure Elton John moment. Few, said Paschal, expected the Government to pass a third budget, never mind a fourth, yet here they are.

In explaining, Paschal experienced a budget speech overrun of 16 per cent, going well over his allotted time

Only because of us, ha-ha-ha, replied Fianna Fáil at the first opportunity. The ha-ha-ha was courtesy of Barry Cowen, who thoughtfully included a string of political gags in his speech.

So here we are, concluded the Minister with great satisfaction. And are we where we want to be? Well, we are and we aren’t.

In explaining, Paschal experienced a budget speech overrun of 16 per cent, going well over his allotted time. The applause from his colleagues was heartfelt.

But it was soon clear that he wanted to escape the shadow, but only where Brexit is concerned. Where the rest of the national finances are concerned, the nitty-gritty of housing and health and those difficult questions which could cloud an election campaign, he gratefully took shelter in the shadow of Brexit.

Whatever form it takes, the Government is geared up for the fray. “We stand ready if it does happen . . . We stand ready to act . . . It is a challenge Ireland has the measure of.” (A stirring message just in case certain people across the Irish Sea decided to listen while sticking pins in their Leo Varadkar doll.)

This “Welcome to the House of Funds” budget promises a big variety of financial “interventions” planned for sectors hit by the UK crashing out of the European Union.

And if all the billions pledged for the cause should run out because the other side has dug in and the absolute worst situation is facing us, the Government will go for the nuclear option and fire up the rainy-day fund.

We will ride the storm because the economy is not the awful place it was before the last, crippling recession. “I can confirm to the House that our economy is in a good position,” smiled Donohoe.

The Taoiseach seemed to be enjoying a nice rest as his colleague got on with delivering his speech. Showing iron resolve, Leo Varadkar didn’t fiddle with his iPhone while Paschal was on his feet. But as soon as he sat down and Fianna Fáil’s Michael McGrath took over, Leo was back to his old ways.

At one point, he was engrossed in what looked like a long read on the BBC website about Boris Johnson. He perused a number of Boris-related articles, brow furrowed as he scrolled down.

It’s tough going, having to endure speech after speech on budget day. Once the Minister has finished speaking, most of his Government colleagues flee the chamber

Then the mood changed. As the Fianna Fáil response continued, the Taoiseach showed his phone to Minister for Housing Eoghan Murphy. The men had a good giggle, then Paschal looked over Leo’s shoulder and he started laughing too at a picture of a muscular, bare-chested man by a pool.

It was Eoghan Murphy. Except this version is a 24-year-old estate agent from Laois who is currently setting pulses racing in the Australian version of Love Island.

But it’s tough going, having to endure speech after speech on budget day. Once the Minister has finished speaking, most of his Government colleagues flee the chamber. The same happens with Fianna Fáil when their speeches are done and by the time we get to the smaller parties the benches are almost bare.

Wisely, while talking about the health budget, Paschal’s speechwriters dodged a bullet when introducing the new “sound and stable model of financial governance within the health sector”. Strong and stable would be the better description, but Theresa May killed it stone dead.

As for the carbon tax introduced as part of the climate change strategy, the Minister said there was cross-party support for it. “Not from me there isn’t,” harrumphed Danny Healy-Rae. But the money for rural transport and the assistance package for the midlands as a result of the loss of traditional peat-related industries kept the usual grumbling from the Independent rural deputies to a minimum.

The anti-hybrid mismatch rules are to be tightened up. Nothing to do with sport.

And a further 50 cent on the ciggies. “Boo!” said Finian McGrath.

There is, of course, a “suite of supports” available in many areas.

It was, as the Minister promised, a budget without surprises. This is not a time for surprises with Brexit’s shadow offering shelter from controversial announcements.

Fianna Fáil’s Michael McGrath was measured in his response. His party has done its bit in keeping a stable government in place “professionally and without drama”. In keeping their word they “put the country ahead of party”.

And hope the electorate will remember this.

He had lots of gags, not all on target.

Minister for Sport and “Photobombing” Shane Ross is like “a one-man policy Cape Canaveral, firing rockets across all departments”.

“He is a scary story sportspeople tell their children when they are bold: if you say his name three times in the mirror he’ll appear for a selfie.”

The two main parties are now fighting for supremacy. Barely a breath between them. Both will claim responsibility for the best in the budget. Both will stand up for Brexit. Both wear the green jersey. But only one, by dint of office, is in the limelight leading the Brexit battle.

“I reckon Leo will pull the plug in November and go to the country,” said a Fianna Fáil backbencher.

“They won’t get a better opportunity than this.”