Beef bouncing back after horsemeat scandal

Consumers have switched from frozen products to fresh, from supermarkets to traditional butchers 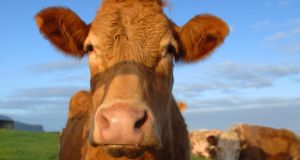 Three months after the horsemeat controversy gripped the Continent, beef exports here have increased by nearly 10 per cent alongside a surge in the number of farmers signing up to strict quality assurance mechanisms.

You could say the industry has never looked so healthy.

In fact the scandal appears to have had little in the way of detrimental effects on the sector in general: consumer confidence seems unscathed while purchasing trends have simply switched from frozen products to fresh, from supermarkets to traditional butchers.

Limited contamination
Experts say the lack of negative fallout is due to the limited nature of the contamination (restricted to frozen burgers and other processed meals) and the fact that the magnitude of the problem quickly spread across the European supply chain, obscuring its initial relationship to Ireland.

Bord Bia this week confirmed that exports of Irish beef for the first three months of the year jumped by 9 per cent on 2012 levels, which had a total annual yield of €1.9 billion.

That figure too is expected to be surpassed this year due to increases in both volume and prices, a development welcomed by the Irish Farmers Association (IFA).

Part of this healthy picture can be explained by the relative lack of frozen burgers consumed here every year (€14.7m worth) and the fact that much of the controversy remained rooted in that product alone.

In 2012 Ireland’s exports of uncooked processed beef, as opposed to fresh meat, accounted for just €170m or 73,000 tonnes, the bulk of which made its way to the UK.

Supermarkets are reticent when it comes to discussing the recent impact on individual sales but anecdotally industry insiders say while frozen burgers and other products associated with the saga have lost sales, customers are simply swapping food types as opposed to the places in which they buy them.

The biggest losers in this sorry affair would appear to be the processors or factories but the degree to which they have been damaged by events remains unclear for now.

“In terms of Ireland Inc and exports as a whole, we were not impacted,” a Bord Bia spokesperson explained.

“Because of the demand in fresh beef there has been a sort of balancing act. There will be an emphasis [now] on a shorter supply chain; they were complicated. That change will have a positive impact for Ireland. You can see that the farmers themselves are responding because people want quality-assured beef.”

Quality scheme
That fact too can be illustrated with hard data. There has been a marked increase in applications from farmers to the Bord Bia “quality assurance scheme” which demands a higher level of third party inspection but which translates to higher returns for producers.

“Beef consumption figures for both the UK and our own domestic market are very positive,” he said. “In addition, with the latest EU beef forecast predicting lower production in major countries, like France and Italy, the beef trade should remain positive.”

The association said it is working hard to get more farmers into the quality assurance scheme but criticised some factories for “attempting to impose excessive penalties on non-quality stock”, a tendency that is damaging efforts to increase participation.

Happy butchers
Ireland’s butchers too are enjoying the flip side. While many consumers who enjoyed frozen burgers in the past are changing to alternative produce like poultry, there are others who are simply returning to the traditional supplier whose stocks are more easily traceable and freshly made.

“Eight burgers for 99 cent; there is no butcher I know that could do that,” said Dave Lang, development manager at the Associated Craft Butchers of Ireland (ACBI), referencing the bargain prices attached to frozen alternatives.

The organisation has more than 400 members, all of whom produce freshly made patties from their own, or local abattoirs: they say a more realistic production cost to sale range is somewhere in the order of 65 cent to 90 cent.

“At the moment it’s very good. The majority of our members are reporting business is up on average by 10 to 15 per cent. The figures that we are getting from the supermarkets [indicate] that frozen burgers are down 48 per cent.”

The fallout from the horsemeat issue is also difficult to compare to previous food scandals because it was not a health crisis whereas the pork dioxin crisis in 2008 saw the recall of products contaminated by cattle feed.

“This was very much about mislabelling and fraudulent behaviour as opposed to being about a health scare or food safety issue,” said the Bord Bia spokesperson. “They are very, very different.”