Analysis: €850 million investment will have spin-off benefits for the area in the long term 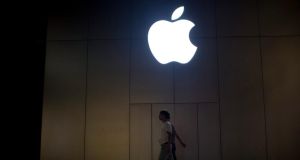 Around 200 jobs will be created in the construction phase and there will be about 100 permanent positions in the facility, once completed. Photograph: Brent Lewin/Bloomberg

Already twitter is flooded with “fields of Athenry” references and rewrites. Apple’s decision to announce an €850 million investment in a data centre in the town in county Galway is a big win for IDA Ireland.

Data centres don’t create huge numbers of jobs directly . Around 200 jobs will be created in the construction phase and there will be about 100 permanent positions in the facility, once completed. However the scale of the investment will itself create very significant activity as the whole thing is built and also spin-off benefits for the area in the long term.

Strategically, data centres also tie the big US multinationals further into the Irish economy and give the IDA another platform on which to market Ireland. Apple’s tax arrangements in Ireland have been famously controversial, but its decision to spend more money here shows that if tax is a way to lure companies in, then further benefits can be won down the road. Given the relatively low job numbers, a profitable company like Apple would not be likely to get direct grant aid for this kind of project.

Data centres are huge power users and are best located in temperate climates. Hence Ireland and Denmark, which is to get the second centre in the investment just announced, had a natural advantage here. Keeping data centres cool is a huge issue and less power is needed in cooler climates for air conditioning and temperature control systems.

Apple follows other big tech companies such as Microsoft, Google and Digital Realty who have all established big data centres in Ireland. Microsoft is currently building its fourth centre in Dublin and will have spend a total of €900 million when it is finished. Increasing use of the internet is driving the need for investment in centres which manage data; in the case of Apple the Galway facility will support products such as iTunes, its App store, its iMessage service and others.

IDA Ireland has had a strong run in attracting investment in recent years, but pressure has come in to try to spread more of the jobs beyond Dublin. Apple, already with its Irish base in Cork, was attracted to the Athenry location, an old Coillte forest .

Its initial announcement – promising new tree planting, an “education space” for local schools and walking trails for locals in addition to economic benefits – is clearly designed to try to get the local community fully on board.

The main controversy surrounding data centres has been their enormous use of energy. So it is no surprise that Apple’s announcement focused largely on its energy use, promising that it would involve renewable energy “from day one”. It is not clear how exactly this will be achieved in Ireland as energy will presumably be drawn from the mix in the national grid . Apple also promises to work with local interests to develop new wind and other renewable sources of energy for the future. The press release boasts that the two new centres will have the lowest environmental impact of any Apple data centres.

The tone of the release suggest Apple is hoping for a quick planning process in Athenry – and presumably the site has been chosen with this in mind. If so, the data fields of Athenry will be up and running in 2017.

1 Fianna Fáil may have just pressed the pause button on the property market
2 UK to prioritise EU trade deal over one with United States
3 Who are Ireland’s 17 billionaires?
4 Dunnes premature in challenging Point Village resolution move, Supreme Court finds
5 Saudi prince’s WhatsApp account ‘directly involved’ in Bezos hack
6 My father in a nursing home wants to gift me his house
7 Are there annual limits on inheritances or gifts to a child?
8 European investor acquires Harcourt Road offices for €55m
9 Corporate tax change is inevitable, says Donohoe
10 Belfast regeneration project worth £500m gets green light
Real news has value SUBSCRIBE