Apple case shows beauty is in eye of software engineer 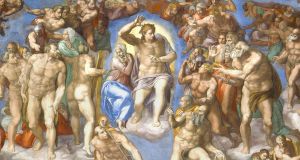 “Art forms are sometimes inaccessible to the untrained eye. Pietro Aretino complained that not even in a brothel would you see the scenes in Michelangelo’s ‘The Last Judgment’.”

The dispute between Apple and the FBI over unlocking the encrypted iPhone used by Syed Rizwan Farook in the San Bernadino (California) shootings last December is being followed with concern by the technology industry, regulatory authorities and the security services in the United States and elsewhere.

An article in the Guardian newspaper on February 22nd caught my attention when it described the cultural challenges within the Apple security software engineering team in being asked to deliberately break their own software code.

The article explained the almost religious awe in which some engineers hold well-designed software artefacts. Some engineers create astonishingly beautiful software in the eyes of their peers, and become famous in their professional communities as artists. Some accept lower-paying employment to have the opportunity to work in a perfectionist culture rather than just mundane coding. Some would view it almost sacrilegious to deliberately break such software, as the FBI is asking Apple to do.

The beauty of so much of engineering in our everyday life is inaccessible to most of the public. An electrical or electronic circuit diagram is hardly visually astounding: but the fabric of the design captured by the network of the various interconnections of component symbols may well astonish and delight a professional engineer. The schematic of an engine, generator, or turbine may appear a maze of cogs, axles and cable: but the insight of the engineer who designed it can only be appreciated by colleagues. The intricate beauty of a software creation can be understood only by those who both have been trained to read code and who have struggled to build polished results.

Architecture is perhaps the only discipline in which engineering design is presented to the public, and soaring cathedrals of beautiful buildings, bridges and towers are impressive. But even then the public rarely has an appreciation of the design decisions and trade-offs buried under the external skin of the construction, leading to an intellectually impressive result.

Of course art forms are also sometimes inaccessible at first sight to the untrained eye, and so unappreciated. Van Gogh died by suicide at 37, having sold just two of his 2,000 or so pieces. Vermeer was forgotten as a minor Dutch artist until two centuries after his death. Keats died of tuberculosis at 25, believing himself a failure. Writing at the time it was produced, the art critic Pietro Aretino complained that not even in a brothel would you see the lurid scenes depicted in Michelangelo’s The Last Judgment.

The genius of an artist can be deeply appreciated only when the student understands the context. Knowing what has happened before, and with a set of tools and a set of alternatives that could have been adopted, why did the artist choose this outcome over any other? As an example, you can find on the internet the first TV appearance of a young Leonard Bernstein in 1954, in which he explains with reverence the themes Beethoven explored and then rejected while writing his famous symphony No 5. At the National Concert Hall, BBC presenter Charles Hazlewood has, more recently, led a series of similar analyses of major symphonic works. Analyses and dissections of well- loved literary, poetic and theatrical works are widely available and studied by students of the fine arts. Indeed, our Leaving Certificate humanities examinations are replete in such questions.

The context and inspiration of what great system designers have achieved, the illuminations and illustrations, and the learning from experience are frequently absent. Inspiration and understanding seems often absent in a vacuum of case studies and exemplars. Unlike education and appreciation in the arts, rarely in the teaching of engineers and innovators is a great design identified, seldom is its architecture explored, and rarely are the reasons the creator rejected alternative structures explained.

Innovation and design requires a combination of left- and right-brain thinking: rational and imaginative, emotional and analytical, ordered and creative. Our education systems frequently present a myriad of tools and rules without context. Too often are our students led down long corridors without understanding the entire floor plan.

1 Why the notion that building more houses will cure our housing woes is bogus
2 Life as a Facebook moderator: ‘People are awful. This is what my job has taught me’
3 Irish companies restrict travel over coronavirus fears
4 Suspicions rife as key Brexit trade talks begin in Brussels
5 Corona beer firm reeling after 8% slide due to coronavirus
6 Coronavirus rocks financial world as hopes for containment fade
7 How well paid do you think you are? Here’s how to work it out
8 ‘The only time apartments were viable was in . . . Ballsbridge, Killiney and Dalkey’
9 Bank leaked my loan request to family who tried to rip me off
10 Airline stocks bear the brunt of Covid-19 volatility
Real news has value SUBSCRIBE