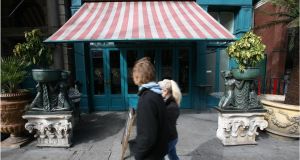 Two of the country’s largest hospitality groups, which between them own landmark pubs such as Cafe en Seine and Whelan’s, are to join forces in a multi-million euro merger.

The Frank Gleeson-owned Mercantile Group, which runs a number of bars and restaurants including The Green Hen, Marcel’s, Opium, Pichet, East Side Tavern, Whelans, and Le Petit Parisien, is to merge with the Capital Bars Group, which owns the George, Cafe en Seine, Howl at the Moon pubs and the Soder + Ko restaurant.

The enlarged group, to be led by Mr Gleeson will be known as the Mercantile Group. The new company will employ 600 people and have revenues of approximately €40 million per annum.

The Capital Bars Group was previously controlled by Danu Investment Partners. Danu is an investment group founded in 2009 by Leonard Ryan, Mark O’Meara and Michael O’Rourke, who co-founded the Setanta Sports Group.

The three businessmen acquired the Capital Bars portfolio - which comprised the George, Cafe en Seine, Howl at the Moon and the Dragon - in a €15 million deal in October 2014, The Dragon, which was located on South Great George’s Street, Dublin has since closed down and been replaced by the Soder + Ko restaurant.

In addition to owning the Capital Bars franchise, the group also owns the UK franchise for steak restaurant chain Smith & Wollensky, as well as a call-centre in Mauritius called Servecalls and the Dundalk-based firm PlayerTek, which is developing wearable sports technology for consumers.

The last publicly available accounts for Danu showed it recorded a €627,461 loss for the year ending December 31st 2013 as against a €388,733 profit for the previous year.

Setanta Sports, the broadcaster established by the men behind Danu in the early 2000s was acquired by Eir, formerly Eircom, for an undisclosed sum in December.

The newly merged group will control 12 venues in total including Cafe en Seine, Marcel’s East Side Tavern, The George, The Green Hen, Howl at the Moon, Marcel’s The Mercantile, Opium, Pichet Soder + Ko and Whelan’s.

“This is a transformational deal for our businesses and will position the Mercantile Group at the forefront of the sector in Dublin. We have ambitious plans to grow the business further both in Dublin and internationally and we are looking forward to a very exciting period ahead,” said Mr Gleeson.

1 Ryanair wants Irish courts to block Skyscanner from selling its flights
2 Using analytics to deploy data science more effectively
3 Cathay Pacific to resume Dublin-Hong Kong flights in March
4 Who are Ireland’s 17 billionaires?
5 Are there annual limits on inheritances or gifts to a child?
6 Are you a Monica, Joey or Chandler when it comes to your data privacy?
7 Phil Hogan says EU ready to do ‘ambitious’ UK trade deal
8 Tipperary land holding of 800 acres seeking €11m
9 How much does it cost to sell your house?
10 Apple’s cash mountain, how it avoids tax, and the Irish link
Real news has value SUBSCRIBE