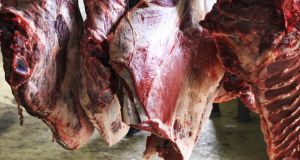 Simon Coveney’s suggestion that the US market could take up to 20,000 tonnes of Irish beef in 2015, worth up to €100 million, and “go way beyond that”, is considered by many as too optimistic

Minister for Agriculture Simon Coveney has overstated the importance of Ireland’s re-entry into the US beef market, according to senior industry sources.

While the deal, announced this week with much fanfare, undoubtedly enhances Ireland’s reputation as a high-end producer, the potential rewards for Irish producers are not obvious.

For one, the US market for premium beef imports is small relative to the size of the industry there. At a push, it might represent 20-30 per cent of the 1.3 million tonnes of imported beef – the vast bulk of which is mince for the burger industry, known in the trade as manufactured beef.

This is because most upmarket retailers and restaurants source their prime cuts of beef locally, under the widely-held assumption that US beef is superior to foreign brands. US corn-fed beef is held up as the gold standard.

This is not to say that Irish beef producers won’t find buyers in the US; a niche market for grass-fed, hormone-free beef has developed, and is said to be growing.

Larry Goodman’s ABP Foods appears to have already landed a lucrative contract with US distributor Sysco, which plans to sell the meat to the popular retail chain Whole Foods, which specialises in natural and organic produce.

However, Mr Coveney’s suggestion that the US market could take up to 20,000 tonnes of Irish beef in 2015, worth up to €100 million, and “go way beyond that” in the future, is considered by many in the industry as too optimistic.

Two separate industry sources said Ireland would be lucky to export 4,000 tonnes to the US. That would put the US market, from Ireland’s export perspective, on a par with Switzerland.

This is a drop in the ocean when compared with the 240,000 tonnes of beef we export annually to the UK, Ireland’s largest export market, which accounts for 53 per cent of total beef exports.

Ireland exports about half a million tonnes of beef each year, 90 per cent of the State’s beef output, which is worth about €2 billion. It is the single biggest component of the country’s €10 billion food and drink export business.

The recent surge in beef prices in the US, where it is now trading at €4.70-€4.80 per kilo compared with €3.85 in Ireland, adds a new dimension to the US decision to grant Ireland access.

Many believe Irish producers may now be able to compete for the bigger US market in manufactured beef because of the higher prices.There are two potential pitfalls with this policy, however.

First, the recent price rises in the US, blamed on historically low herd numbers, is unlikely to last as suppliers bolster stock numbers to correct for the imbalance.

Second, mince production is relatively costlier in Europe than in other jurisdictions for various reasons, meaning Irish producers may struggle to compete.

In addition, it’s unclear if the export licences being drawn up by the Department of Agriculture in conjunction with its US counterpart will specify high-value steak cuts only or whether they will include manufactured beef; the latter is still viewed as riskier produce, from the perspective of food safety officials, because of the contamination potential.

“Ireland has been approved for market entry based on US inspections of our plants and systems in July of last year,” a department spokesman told The Irish Times.

“The US approach has been to assess whether our systems can be considered equivalent to theirs and, now that this has been established, they are allowing the department to approve individual plants here for export, based on criteria agreed with our US counterparts. “The department has been working with interested plants here in some detail over the last few months to assess their suitability for export to the US market,” he added.

Processing plants operated by ABP Foods and Donegal-based Foyle Meats are said to be at the front of the queue.

It’s perhaps understandable that Mr Coveney sought to play up the importance of the US deal, given the criticism he has received from beef farmers in recent months over falling prices – something over which he has little control.

He deserves credit for brokering the ågreement ahead of European rivals. The two-year process involved intensive negotiations and a detailed assessment of Ireland’s post-BSE beef industry, which features tight controls in terms of slaughter practice and meat traceability.

Nonetheless, one industry source said placing Ireland first in line had more to do with Ireland’s cosy relationship with Washington than with beef industry standards, which are now largely uniform across EU states.

Most industry officials believe the real dividend for Ireland in regaining access to the US is that it will pave the way for access into other markets, most obviously China. Many countries tend to take their lead from big countries like the US when considering whether or not to grant access, and Ireland already enjoys a strong global reputation for organically produced food.

This week’s announcement comes against a backdrop of transatlantic trade negotiations between the European Union and the US, under the banner of the Transatlantic Trade and Investment Partnership (TTIP) – the proposed free trade agreement. While these talks are likely to drag on into the next US presidential term, the US is likely to seek a lifting of restrictions on its beef exports to Europe as a quid pro quo for the letting Europe back into the US.

The current trade arrangements limit the US to exporting about 30,000 tonnes of beef into Europe before a punitive tariff kicks in.

An easing of this could seriously disrupt the pattern of trade in Europe, with an influx of US beef lowering prices and eroding producer margins.

This is perhaps the biggest threat to the Irish beef industry.

While welcoming news of the US deal, IFA president Eddie Downey warned that access for Irish and European beef to the US market cannot be used against the EU in the current TTIP negotiations and in the drive by the US to gain preferential access for large volumes of US beef to the EU market.

He said the IFA is very clear that that the domestic Irish and EU beef sector cannot be sacrificed as a bargaining chip in the TTIP negotiations to secure a trade deal.

In the negotiations, he said Ireland must insist on equivalence of standards and all beef imports must meet the same animal health, welfare and environmental standards as is required of EU producers.

He also said under no circumstances can the EU accept hormone beef imports.

Much has been made of Ireland’s grass-fed, hormone-free beef, and how this might go down well with the growing consumer preference for organically produced meat in the US.

However, according to Bord Bia’s beef and livestock sector manager Joe Burke, under the strict US specifications of “green beef” most Irish cattle don’t qualify. “This is because most of our animals, at some point in their lives, are fed some form of supplement or concentrate feed.”

Because grass silage tends not to be high enough in energy to finish cattle or grow them at a fast enough rate, farmers tend to augment the silage diet in the winter, he said.

Teagasc is currently examining the potential of rearing cattle to a pure grass-fed specification on its research farm at Grange in Co Meath. This involves developing a better forage supply in the winter in order to cut out the requirement for supplementary feed.

“If you’re going for 100 per cent grass-fed, you would more than likely use traditional breeds likes Angus and Hereford which tend to lay down fat more easily than some of the more modern continental breeds,” Mr Burke said.

This doesn’t mean Irish producers won’t get a premium price for Irish beef as most Irish animals would comply with the “natural beef” specification, which accounts for about 7 per cent of the US beef industry.

Natural beef typically refers to grass-based, hormone-free animals that aren’t given routine antimicrobial or antibiotic treatment as part of the production process.

Mr Burke said the authorities could advise producers to go after the pure grass-fed niche if it was deemed economic, but it remains to be seen where the producer would sell the less prime cuts.

Another aspect of this week’s announcement is whether it will pave the way for the sale of Irish lamb, currently banned in the US, a market that some believe has greater potential. Manufactured pork products also remain under an embargo in the US, though importers can bring in pig carcasses and sausage ingredients to make “Irish-style” sausages.

A Department of Agriculture spokesman said: “Bord Bia has identified the primary target for US market entry as white tablecloth restaurants in key culinary centres such as New York City, Boston and Washington DC, followed by listings in premium grocery retailers initially in the northeastern states.”

Bord Bia is in the process of setting up a dedicated website to highlight the qualities of Irish beef to US consumers and buyers. Only time will tell whether access to the US is a “huge prize” as Minister Coveney contends.

1 Should I switch bank now with Ulster Bank at risk of closing?
2 Air travel never going ‘back to way it was’
3 Household wealth jumps by 74% since last recession – report
4 Will brother’s widow get half of our parents’ estate when they die?
5 Tourism and aviation players demand von der Leyen end EU travel chaos
6 Pallet manufacturer looks to imports as timber crisis takes root
7 House insurance: save yourself money by reviewing your policy
8 ‘Tax war’ will hit Ireland if digital tax talks fail, OECD says
9 ‘I have three children and a dog, so I feel like a bit of a human ATM’
10 Finance Ireland refinances mortgages with low level of payment breaks
Real news has value SUBSCRIBE