Strap yourselves in, the global milk market promises to be a rough ride 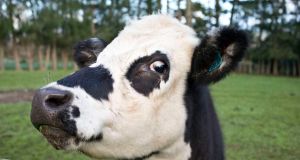 While milk prices have steadied in the first quarter of 2015, they are still some way off their peak. Photograph: Nigel Marple/Reuters

Last year marked the end of a six-year, China-driven boom in milk prices. Beijing’s stockpiling of milk powder, Russia’s trade response to western sanctions over the Ukraine, and a bumper production year sent the market into a nosedive.

Between June and October, prices paid to Irish dairy farmers dropped from a record high of 37 cent a litre to 28 cent. They fell even lower in other countries where producers were forced to take the full hit.

Given the average cost of production here, before labour costs, is 25 cent a litre, price swings of this magnitude can be fatal, particularly for producers used to the insulation of market supports.

By the year’s end, milk was cheaper than bottled water in most western supermarkets.

This was the free market – hailed as the promised land for quota-constrained Irish farmers – in action.

The benefits of unshackling the industry here from Europe’s outmoded system of protections are self-evident – the island is probably the most ideal patch of dairy pasture in the northern hemisphere. However, anyone who believes it is going to be a smooth ride is in for a shock.

While prices have steadied in the first quarter of 2015, thanks in part to a drought in New Zealand, they are still some way off their peak. The question is whether last year’s reverse represents mere turbulence – the natural vicissitudes of supply and demand – in an otherwise expanding market or a change in the underlying dynamic.

Most analysts tend towards the former but all agree the market is becoming inherently more volatile as barriers to trade break down.

“What has become clear in recent months is the increased correlation of international market prices for dairy commodities as international barriers are being removed. Consequently, price volatility in most dairy products is increasing at a significant rate,” says Charlie Hyland, commodity risk manager with financial services group Intl Fcstone.

On the basis of trends, he says global demand will outstrip supply by 25 billion litres by 2020 – a trade gap that exporting countries, such as Ireland, will be keen to exploit.

Global population growth, rising disposable income, more women in the workforce, urbanisation and the adoption of western dietary habits are all fuelling an insatiable appetite for dairy products across Asia and Africa. At the centre of this “white gold rush” is China. In 2013, it imported $16.3 billion of powdered milk, almost two-thirds of the entire world market – 18,500 tonnes came from Ireland.

“If you look at the type of growth we’re seeing, about 80 per cent of the expansion in processing facilities is towards exportable products, like powder,” Bellamy says, citing Glanbia’s new Belview facility in Co Kilkenny as a prime example.

The spark that ignited China’s demand came in 2008, when thousands of babies fell ill from domestic formula products made from milk adulterated with melamine, a toxic chemical which artificially boosted the milk’s protein count. The population decided the only safe food for babies was foreign formula – the domestic market still hasn’t recovered.

Even with the surge in imports, Chinese people still only consume on average 30kg of milk produce a year, compared to the 70-80kg of their Korean and Japanese neighbours. With purchasing power no longer an obstacle, experts expect Chinese intake to double within a decade. It’s a metric that food groups, from Nestlé to Kraft, are keen to exploit.

Laurence Shalloo of Teagasc believes, however, Irish farmers will have to learn to surf short-term price volatility if they wish to exploit this longer-term potential. Up until 2007, Brussels functioned as the buyer of last resort for European farmers thereby guaranteeing a minimum price for milk producers, thus creating a stable pricing environment.

Since the removal of this intervention, the international commodity market has begun to set prices in Europe, he says, highlighting how last year’s volatility strongly affected producers in low-exporting countries like Britain and France.

“They were as badly affected by these commodity price drops as countries like New Zealand or Ireland even though they’re not massive exporters.”

“The international market is now setting internal market prices...and that’s going to be the dynamic from here on in.”

Futures markets in dairy are undoubtedly going to become more common as price fluctuation becomes part and parcel of the trade.

Hyland says 2014 tested the theory that a fundamental shift in dietary patterns and increased economic growth rates in China would result in ample demand for the international growth in dairy production.

While Chinese demand is still expanding, he believes it will increasingly be satisfied by the local producers, as Beijing tries to lessen its reliance on imports.

The Beijing authorities are attempting to shift the industry away from the traditional, small farming units to bigger, more mechanised operations - a shift that has temporarily cut domestic supply.

Another global factor is the current weakness of the euro; parity with the dollar is now inevitable given Frankfurt’s stance. As milk prices are quoted in dollars, this gives European farmers a considerable competitive advantage.

The new markets across Asia and Africa are also breaking down the forms in which traditional dairy staples are delivered.

Instead of liquid milk, butter and cheese, consumers are buying powdered milk products and protein drinks, in many instances, produced with whey - the once-discarded byproduct of cheese-making.

The name supposedly plays on China’s penchant for nonsensical English phrases. Sales of the drink were the only bright note in Coke’s recent set of disappointing numbers for China.

Firms realise that by putting a portion of whey into these drinks they can supply a “halo of healthiness” to dairy-obsessed Asians that doesn’t have the full cost of dairy, says Bellamy.

If Ireland is to achieve its ambitious target of increasing milk output by 50 per cent by 2020, it will be through these types of products, he says.