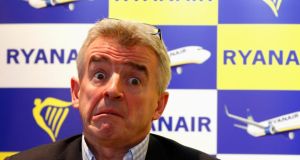 Ryanair chief executive Michael O’Leary said he receives between €60,000 and €80,000 in subsidies for his farm enterprise, and the fact that people like him received subsidies was wrong. Photograph: Yves Herman/Reuters

Ryanair boss Michael O’Leary’s assertions that rural Ireland was doing well and that we would be better off without farm subsidies have been criticised by Independent MEP Marian Harkin.

Asked on RTÉ Radio’s Countrywide programme about last week’s report on the decline of rural areas, he said many such reports were produced by people with a vested interest.

“The countryside in Ireland is doing well,” he said. “I think this year, to be fair, tourism will have a boom year.”

Ms Harkin said Mr O’Leary was “a multi-millionaire hobby farmer” and the last person who should be pontificating about the role of small farmers.

Mr O’Leary was speaking before Saturday’s Aberdeen Angus sale on his farm in Mullingar, Co Westmeath. He established the herd in 1997 and has a farm management team to run the business.

Ms Harkin pointed to the report published by the Commission for the Economic Development of Rural Areas which found that small towns and rural areas were hardest hit by the recession.

“Michael O’Leary’s suggestion that rural areas are doing well and his dismissal of the role of small farmers beggars belief. His suggestion that they should receive no subsidies from the EU reveals his ignorance of the role played by these, often part-time farmers, in sustaining the economic and social fabric of rural areas,” she said.

This was a reference to remarks he made in an interview on Midlands Radio 3 when he said he was not a great supporter of farm subsidies, even though he was a significant recipient.

He said he received between €60,000 and €80,000 for his farm enterprise and the fact that people like him received subsidies was ultimately wrong. But he also said he was opposed to very small scale farmers with sub-economic units getting subsidies.

“Ultimately, they can’t survive and they can’t make a living on those non-economic units,” he said.

“I have long held the view, that not unlike New Zealand, that we would be better off with no subsidies... But it is not a popular view within farming circles, because they are wedded to these income subsidies.”

Ms Harkin said the Ryanair boss failed to understand the role of farm subsidies in ensuring the quality, traceability and security of food produced in the EU and in making it its affordable for EU consumers.